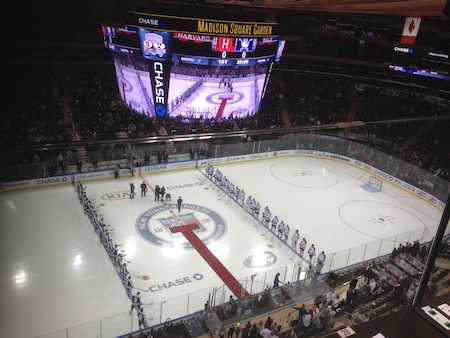 The defending National Champion and tenth-ranked Yale Bulldog hockey team went into Madison Square Garden and showed the crowd of over 15,000 why they are one of the top teams in the NCAA. The Bulldogs defeated the Harvard Crimson 5-1, in the Inaugural Rivalry on Ice on Saturday night.

Yale used three goals in three minutes and six seconds to take over the game.

“We got a quick goal in the second and you could tell on the bench our resolve was a bit different,” Bulldogs coach Keith Allain said. “We were better offensively, but also better defensively. Once we got our grips on the lead, we stiffened even more defensively and (Harvard) really didn’t have much going after that.”

The rally started when sophomore Cody Learned fired from inside the blue line. The puck took a funny hop and found its way past Harvard goalie Raphael Girard.

“I was a little surprised (it went in),” said Learned, who was named game MVP. “Coach always tells us to get shots on net. I just tried to rip it, and I’m glad it bounced in.”
Yale continued the pressure and found the back of the net 2:41 later, when Senior Gus Young roofed his second of the season, on a feed from Mike Doherty, to make it 3-1.

The Bulldogs maintained the attack and 26 seconds later, Learned scored his second of the night when he found a rebound and put it past Girard.

The continued chances led the Bulldogs to open up a three goal advantage, 4-1, and also gave Girard an early exit from the contest.

Yale added another insurance goal in the third period when Kenny Agostino slid the puck past Steve Michalek, who made 15 saves in relief of Girard.

The Bulldogs opened the scoring when Doherty took a feed from Stu Wilson and put it in the back of the net.

Later in the period, the Crimson knotted the score, as Jimmy Vesey finished a Tic-tac-toe passing play by putting a one timer past Yale goalie Alex Lyon.

Lyon, who improved to 5-3-4, made 23 saves on 24 shots.
“Alex did a fantastic job tonight,” Yale Head Coach Keith Allain said about his goalie’s play. “He grew as the game went on. I really liked the way he was placing the puck. He did a good job of putting pucks in safe areas for us.”

The Yale defense also held the Crimson to 10 shots in the final two stanzas after allowing 14 in the first.

The star power of two of the best teams in college hockey in the famous arena made for a great night in Manhattan. It was a night that players and coaches who took part in want to see in the future.

“To play a traditional rival like Harvard in a building like Madison Square Garden is something I know our guys will never forget,” Allain said. “It took a lot of hard work to fill the building. We have a tremendous fan base and a lot of alums who were excited to come here. Whether that excitement will be year to year, or every other year, I certainly think this should be part of our planning, long-term, on some kind of regular basis.”