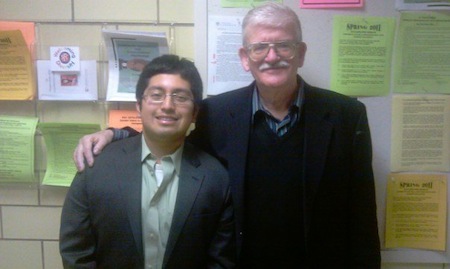 St. Francis College is the place where Xavier Gonzales’ dreams began. Although a transfer student, he has been able to achieve many accomplishments within the short period of time here at SFC.

Gonzales is currently a senior with a double major in Psychology and International Cultural Studies (concentration in Latin American and Caribbean Studies), and a minor in Spanish.From the beginning, Xavier was a strong minded and goal driven individual.

What really makes Xavier different than most students? He was hired for an internship in The United Nations. He works for the Non-Governmental Organization (NGO); Franciscans International.

On the other hand, St. Francis College continues to provide a Liberal Arts Education and allows him to work in internships and jobs while he is a student until graduation in May 2012.

When Gonzales moved back to New York City, he applied to St. Francis College and said: “ I didn’t want to not be in school.”

Luckily, his fear was no longer an issue. Xavier had received a response in regards to his submitted application and was accepted to be a student at SFC.

As a psychology major he quickly took the opportunity to work for Dr. Gielen, a psychology professor at SFC. He received the job of transcribing interviews, Dr. Gielen is running his own institute; the Institute for International and Cross-Cultural Psychology. Dr. Gielen, in the role of mentor, assisted Gonzales with advisement and motivated him to pursue an education in the psychology field, which could someday evolve into a career.

His brother Peter Gonzales, recent graduate of SFC, explained the myriad of opportunities available to his younger brother upon enrollment at SFC.

Determined, Xavier Francis Gonzales carried a double major and minor, while being employed.

Soon, he spoke to the chairman, Dr. Green, of International Cultural Studies. Xavier was in high hopes that Dr. Green would give him advice on how to pursue his second major.

Dr. Green inquired Xavier about the NGO position. They initially declined his application; However, they called back one month later. After his interview, and reviewing his resume, he was offered the position. Gonzales gladly took this opportunity to work for the NGO.

While discussing how he juggles such great responsibility, Xavier Gonzales said, “Because of SFC I could work, take the opportunity to work, and go to school taking a handful of classes. This semester, I am taking 19 credits, and now with 2 internships and 2 jobs, I still have time to be part of 2 clubs in school (Psychology and Leo Club [Co-Chair of International Relations Committee]).”

Along with his new job opportunity, he has sought out for a paid position in a health clinic. As a combination, both of the astounding positions are beneficial to add to any resume for a future career in psychology.

In the beginning, he did not plan on doing all of this, let alone achieving his hightest GPA of 3.557.

When asked if he was an overachiever, he replied, “Some people call me an overachiever but I tell them how am I? I’m lazy…there are people who are smarter than me who just need to learn how to take an opportunity when it hits them. It wasn’t until I came to SFC where I learned how to work in the real world.”

Any student who stops and thinks that they can not succeed or achieve anything, take a moment and look at Xavier Gonzales’ achievements. He has fallen into good fortune, during a time he thought he was just going to go to school and work.

Mr. Gonzales reflects on his new opportunities and internship at the United Nations. He is planning his future, and hopes to publish his own psychology paper in the near future.

It is possible for anyone to follow a strong career path, make a name for themselves, and have a goal.

“ I am blessed. It feels like I am doing what I had to do. “- Xavier Gonzales

WHAT MAKES YOU BEAUTIFUL?
THE DEMOCRACY DEBATE: A LIVELY EXCHANGE?