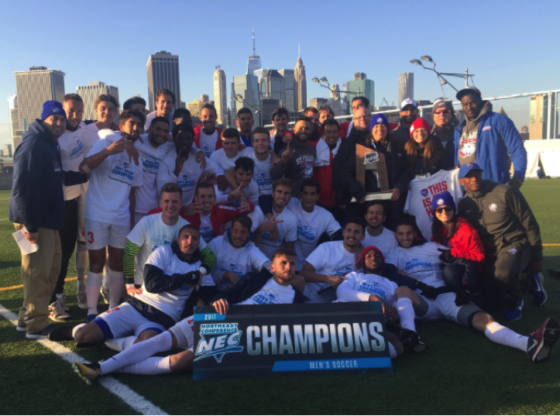 The flurry of goals all started when junior forward Ali Tounkara scored his third tournament goal in the 10th minute of play. Junior defender Dominick Falanga scored off an assist from sophomore defender Marco Torriani in the 24th minute of play. It was Falanga’s seventh goal of the year and the second Terriers goal of the game.

The five-goal differential tied for the largest margin of victory in NEC Championship match history. Previously, Fairleigh Dickinson beat Mount St. Mary’s with a score of 7-2 to win the 2008 NEC Championship.

Ali Tounkara was named the NEC Tournament MVP. After the match, he said “it was great to score an early goal” and “it gave us a great amount of confidence and put us in a good position” after “a lot of pressure leading up to the game.” Regarding his MVP honors, Tounkara said “the MVP is nice but I wouldn’t have been able to achieve it without the help of my teammates.” 11-year St. Francis Terriers head coach Tom Giovatto said “Ali was incredible for us.” He additionally stated that the game “was a complete performance today against a very good team.” Coach Giovatto added “I couldn’t have asked for anything better and I’m so proud of our guys” and that “the big crowd really helped us.”

As of November 14th, The Terriers will play the Fordham University Rams Soccer team in the first round of the NCAA Men’s College Cup on Thursday, November 16th at 7 pm in The Bronx, New York. The Terriers, after winning the 2017 NEC Tournament, have now won a total of seven NEC Championship titles and have earned eighth NCAA Soccer Tournament bid. After the 2017 NEC Championship win, the St. Francis Terriers Soccer team is now widely regarded as a modern-day dynasty. St. Francis College’s 2017 NEC Tournament win was their second NEC Championship in a row, and their 4th in 5 years after previously winning the title in 2013, 2014, and last year in 2016.

Congratulations to the SFC Dynasty!

“The Romanoffs” Film Shoot
Marioara Trifan on Piano: Music to Our Ears