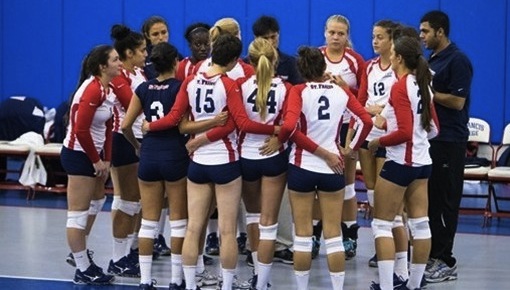 The 2014 volleyball season is well underway and the Terriers have gotten off to a bit of a slow start. They will be hosting the St. Francis Terrier Invitational this weekend and it kicks off today with a double header.

After a tough 2013 season the Terriers are looking to vastly improve here in 2014. Even though their record hasn’t said so, they have fought hard and showed signs of improvement. Currently the Terriers stand at (1-4) on the season, which by no means is a good record but there has been some quality play in their five matches.

Over the five games that the Terriers have played they have received some quality play from juniors Kelly O’Halloran, Maggie Niu and Leah Zitting. These three have played a solid brand of volleyball and have led the way for their team in the early goings.

Last time out the Terriers dropped their home opener to the Iona Gales three sets to none. They lost by the scores of, 25-21, 25-19, and 25-16.Yet again the Terriers were not over matched but just fell a bit short to the Gaels. Which has been the case in the early going for the Terriers; they haven’t been overmatched to a great extent against any of the teams they’ve faced.

Every game for the most part has been a back and forth affair, but the Terriers have just been unable to grab the lead and hold onto it for good. This team has made strides in the right direction which has showed early on this season. They are hungry and ready to compete every time they hit the court. For the Terriers now it is just a matter of executing and holding onto leads for good.

The Terriers will take on Hofstra University in their first match of the St. Francis Brooklyn Terrier Invitation on Friday at 12 PM. They already know what to expect from the Pride since they have faced them already once this season. On Aug. 29, the Pride knocked off the Terriers three sets to one, in the opening match of the season.

That match was a tough one for the Terriers who managed to win the first set but dropped the next three by a blowout margin. The Terriers will most definitely be looking for revenge and there is no better place to do it than on their home court.

Being that they are hosting the invitational the Terriers will be looking to put on a good show while defending their home court. If the Terriers can put it all together, meaning all the aspects of their game are clicking they will have a decent shot in both of these matches.