Women’s volleyball prevails 3-1 against LIU in a sweet, sweet victory 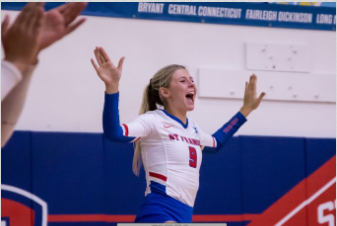 SFC women’s volleyball were triumphant over their local rivals, as they beat the LIU Sharks in four sets.

Some described this game as a “rollercoaster” or “heart attack” match.

The Terriers took the first set but fell to the Sharks in the second. However, they rose up and claimed the third. The Terriers were now up two sets to one.

At the beginning of the fourth set, the Terriers were struggling,  as they trailed the sharks by 11 points.

What was going on? But when least expected, the Terriers made a massive comeback leaving the crowd in a frenzy, as they took point by point, soon to beat the Sharks with a 27-25 victory.

Their supporters were filled with anxiety as they made their way back to the top.

As the point was recorded, the Terriers Supporters were jumping and shouting. Celebrating their well fought for victory over the Sharks.

The Terrier brought their A game tonight, performing outstandingly.

Leading on the board was Lauren Montgomery with 18.5 points, finishing with 16 kills and 8 digs. Next, Taris Pittman recorded 12.5 points and totaled 10 kills. Ally Speweik brought in 13 points tallying 12 kills. Tonight, Kizzy Rodriguez finished with 25 digs, Vanja Miljacic with 15 digs, Cristina Robles with 13 and Angelee Ng finished with 43 assists and 11 digs. Excellent work by the Terriers.

Terriers return to the court on Friday November 1, as they face the Knights followed by Central Connecticut on Saturday.