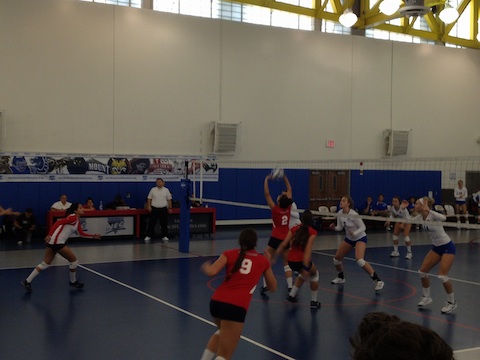 The SFC womens volleyball team opened the NEC season with a loss to Central Connecticut State in straight sets.

The St. Francis College Terriers dropped to 1-16 overall and 0-1 in the NEC following their loss today to the Central Connecticut State Blue Devils.

SFC opened the match with a hard fought first set. After trailing 16-11, the Terriers rallied back to tie the score at 20 apiece. They would eventually lose 25-22 as sophomore Jayma Copeland put together three kills during the set.

Head coach Micah Acoba said, “In the first set I really thought we played well. We were playing without any worry, fearless.”

The second set was also a close one throughout. St. Francis tied the game early at 11. CCSU went on to grab a lead but the Terriers would fight back and cut the deficit to four as the score was 16-20. CCSU went on to score the next five points and win the second set . Freshmen Maggie Niu chipped in with three kills of her own in that set.

CCSU would prove to be too much in the third set as they won in a commanding 25-13 score. Junior Slavica Stefanovic gave it her all as she performed two kills in the final set. She also added a service ace throughout the game.

“What tends to happen to us as you saw in the second and third set is that the ladies tend to let things that have happened in the past bother them,” said Acoba. “They really need to focus on being in the moment and playing each point,” he added.

CCSU was led by Blaike King, Jamie Rademacher, and Emily Cochran who all had double digit kills in the game. Freshmen Makenna Lommori also helped with a match-high 43 assists.

St. Francis will host their next match against Sacred Heart on Sunday at 1 p.m.