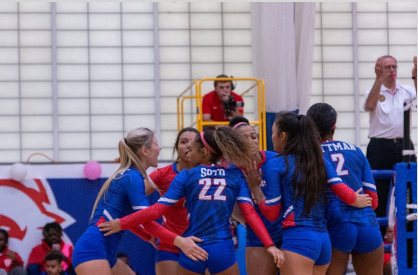 It was a tough battle between the SFC Terriers and the RMU Colonials, as they faced off earlier today at the Genovesi Center, Brooklyn, New York.

It was clear that RMU had no intentions of losing as they claimed the first set, followed by the second, and then the third, with Maria Alfano finishing with 12 kills and Nikolette Zanoli with 16 digs. This was no easy win for Colonials as the Terriers fought competitively.

On the attack, Lauren Montgomery finished, yet again, with 12 kills and Ally Speweik with 9 kills. Defensively, Kizzy Rodriguez, Soto Genesis, and Angie Speweik made their mark with 16, 14 and 12 digs respectively. Angelee Ng finished with a whopping 31 assists. It was evident that the Terriers were not giving up without a fight.

Now, it’s time for the Terriers to reflect and improve their game as they take on Saint Peters on Tuesday October 22 at 7PM. Venue, Saint Peters, New Jersey.

Terriers outclass Bryant 3-0 and are back into the run for playoff
Movie Masterpiece: In Defense of Once Upon a Time in Hollywood