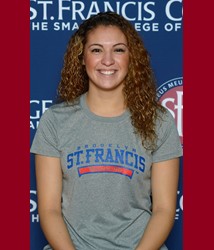 Anne Kuczynki, Freestyle from Florida, placed third in three freestyles, 200, 100, and 1000, and participated in the 200 medley relay, breaking the school record with a time of 1:49:93, taking third place overall.

Taylah Harrison, Diver from Australia, took runner-up honors in the three-meter dive in her first collegiate meet as a Terrier. Harrison broke the school record in the one-meter event with a score of 189.55.

Kristina Hernandez, Freestyle from Washingtonville, NY, took second place in both 500 freestyles and 1000 freestyles, and captured 200 freestyle, breaking the 1650 record with a time of 18:12:24.

Practicing from Monday through Friday has paid off. If they are not swimming in the pool, the new girls are usually in the gym, lifting and running.

“During practice we encourage each other to go faster or to do well, in competitions we push each other. The little things we say can be a lot of motivation for one another. You will see the team cheering one another on; we work as a team in and out of the water whether you do bad or not. We are supportive of one another,” said Jessica Reynoso.

Even as freshmen, the new swimmers have made quite an impact on the team, and have gained attention for their great athleticism as individuals and as a team. Their heads are in the game, clearly focused.

Kristina Harrison said, ” I’ve never broken a school record before so it has a big impact on me, it pushes me and it is very motivating because it tells me that I have a lot of potential.” She explained that in college, the competition is different. You are recognized individually, but it is more importantly a group effort, where you work together to get points for the team, compared to high school, where your accomplishments are individualized.

Competition starts in October and ends in March. To keep this up, Taylah Harrison said, ” You have to keep training hard and have the motivation to come into the pool everyday, do your best and if you’re tired suck it up.”

Women’s Swimming and Diving is 5-7 overall and 1-2 in the conference, so look out for the Terriers in their race against Fordham University in the Bronx, Feb. 5 at 6pm.