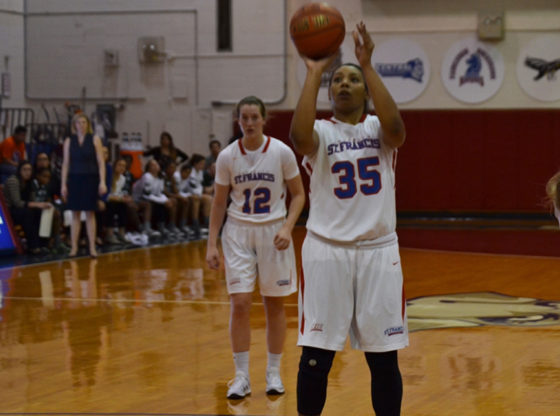 After keeping the score close for the entire second half, a failed three-pointer in the game’s last second caused the St. Francis Brooklyn Terriers women’s basketball team to fall 55-52 to the Manhattan College Jaspers Wednesday night.

After the Jaspers led by as many as 10 points in the first half, they took a 30-26 advantage at halftime.

“We started out slow offensively,” Head Coach John Thurston said in a post-game interview. “We didn’t have a good first quarter offensively. In what seemed like forever we had six points, so I think that hurt us.”

The second half wasn’t as easy for the visiting team, as their highest lead was by six points and the Terriers stayed close for the majority of the 20 minutes.

After senior guard Olivia Levey tied the game with 46 seconds remaining in the third quarter, she fit in a layup three seconds before the buzzer to give the Terriers a 42-40 advantage at the quarter’s end.

The Terriers couldn’t maintain the lead in the final quarter, but were able to stay close for the entire ten minutes.

“I thought we did a great job boxing out,” Thurston told SFC Today. “A lot of the rebounds came over our heads, so the only way we can get better at that between now and Sunday is for everyone to grow four or five inches.”

After Levey’s free throw in the last 12 seconds put them two points behind the visitors, sophomore forward Maria Palarino attempted a three-pointer one second before the final buzzer, but missed.

“They’re a good team,” the coach said. “On any day, we’re dead even with them. We can play 10 times and have 10 three-point games and go either way.”

“I’m just really proud of the way they battled,” Thurston told SFC Today. “Manhattan likes to be a physical team and our girls didn’t back down.”

The Terriers will host the (1-6) Saint Peter’s University Peacocks Sunday at 1 pm.