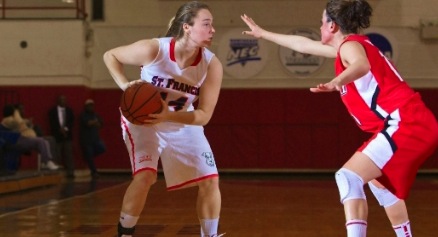 Recap: The lady Terriers were able to end their three game losing sreak this afternoon as they displayed a strong performance defensively and offensively, taking their fifth NEC win of the season.

Junior forward Sarah Benedetti put on show today. Benedetti scored a total of 17 points and was 5 for 9 from beyond the arc.

It was also great to see Junior foward Jessica Kaufman continue her hot momentum. Kaufman scored a total of 10 points and hauled in 6 rebounds.

Junior guard Katie Fox was also a key contributer during the game. Fox was able to create shots and find teammates open. She finished the game with 10 points and 4 assist.

It was clear that the Terriers had no problem shooting the ball today, as they shot 51.1% from the field.

On the denfensive side, the Terriers were able to control the Blue Devils, limiting them to shooting only 36.4% from the field.

It was odd to see a team only take four shots from behind the three point line.

Today’s win puts the Terriers at 13-6 overall and 5-4 against NEC teams.

Today’s game was a good sign for the Terriers as they move forward to their next game, which will take place this Monday at 7pm. They will take on 1-18 Fairleigh Dickinson University.