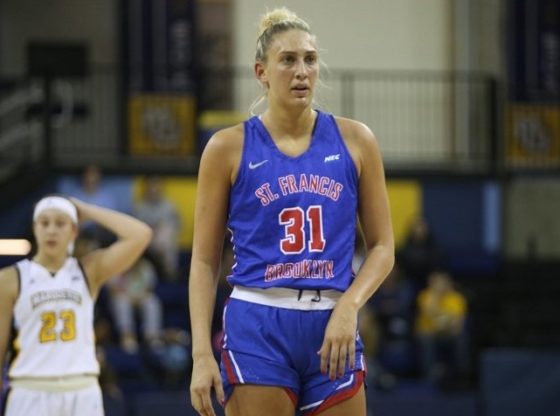 The Terriers recorded their second loss of the season last evening against Marquette of the Big East, (0-2).

They started with a 6-0 run within the first three minutes of the contest, however, Selena Lott of the Golden Eagles interrupted their momentum with a three-point shot. The teams went back and forth equalizing at the end of the first quarter at 17-17.

The Golden Eagles made a 14-6 mark in the second quarter which gave them the upper hand throughout the game. In the third quarter, they took an 11-point led but the Terriers worked hard closing the gap early in the fourth quarter bringing the score to 57-60. Unfortunately for the Terriers, they would never equalize as the Golden Eagles as they soared to their victory.

Selena Lott of the Golden Eagles topped her team with 24 points. In her 37 minutes of play, she assisted in eight baskets, grabbed eight rebounds and landed a perfect three shots from the free-throw line. Chloe Marotta played for 29 minutes in which she recorded 20 points and grabbed 12 rebounds. Camryn Taylor contributed 15 points and grabbed seven rebounds in her 15 minutes on the court. Both Chloe and Camryn landed three out of five shots at the free-throw line.

Leading the Terriers scoring board was Ally Lassen. Playing for 38 minutes, she tallied 24 points, 18 of which was recorded within the first half of the contest. Powerhouse Jade Johnson was contained by the Golden Eagles but managed to finish with 20 points, three rebounds and a perfect five shots at the free-throw line. Freshman Nevena Dimitrijevic contributed nine points, assisted in nine baskets and recorded four steals. Also, Freshman Alyssa contributed seven points, grabbed four rebounds and recorded two steals.

Next, the Terriers will be back in action on Sunday, November 10, at 2 p.m. as they visit Boston College of the ACC.

Women’s Basketball: The Terriers Fell in Their Home Opener
Men on a Mission Records Their First Win (1-1)