WOMEN’S BASKETBALL: SEAHAWKS SWOOP IN AND BEAT THE TERRIERS 73-62

Home /Sports/WOMEN’S BASKETBALL: SEAHAWKS SWOOP IN AND BEAT THE TERRIERS 73-62 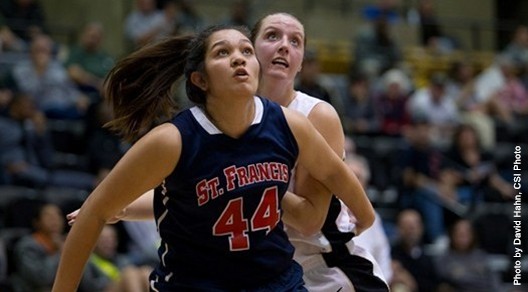 Final: The St. Francis Terriers lose to the Wagner Seahawks 73-62. It’s the Terriers fourth loss in the last five games and it marks their first home loss of the season.

Recap: The Terriers have been on a terrible run of late and tonight was no different. They have not been the same team since their eight game win streak was snapped.

Tonight the Terriers shot horribly from beyond the arc. The team was 3-14 from behind the three point line.

But it was junior forward Jessica Kaufman that tried to keep the Terriers in the game. Kaufman scored a career high 20 points. She was even able to grab six rebounds.

But her great performance wasn’t enough. After the game Kaufman commented on the Terriers recent struggles saying “it’s about the team working together and stuff and I think we need to go back to pratice and work on everything we need to work on.”

As for the Wagner Seahawks they played great tonight. The Terriers were unable to defend the three ball.

Wagner was 6-11 from behind the three point line. But it was freshman guard Jasmine Mwajei who stole the show tonight

Jasmin scored 27 points and grabbed 7 rebounds in 27 minutes of game play. No one on the Terriers was able to stop her.

Terriers coach John Thurston commented on tonight’s loss by saying “Teams go through this over the course of the season whether you’re in the NBA or a college team they go through some down times and it’s about how you bounce back.”

Their next game will be at home in Brooklyn this Saturday at 1pm and they will take on the Centeral Connecticut Blue Devils.

Halftime Update: The St. Francis Terriers trail the Wanger Seahawks 27-23 at the end of the first half.

Recap: It has been a slow start for the lady Terriers. They are struggling to find any offensivie rhythm.

As team the Terriers are shooting poorly. Sophomore guard Leach Fechko has been the only offensive weapon. She leads the team with 7pts and has grabbed 3 rebounds.

In the second half the Terriers will need to find a way to defend the three ball. The Seahawks are 4-7 from behind the three point line.

Freshman guard Lyndsay Rowe leads the Seahawks in points. She has not missed a shot. Lyndsay is 4-4 from the field and 2-2 from beyond the arc.

The Terriers will need their key players to step up if they want to get off their 2 game losing streak. This could be their first home loss of the season.