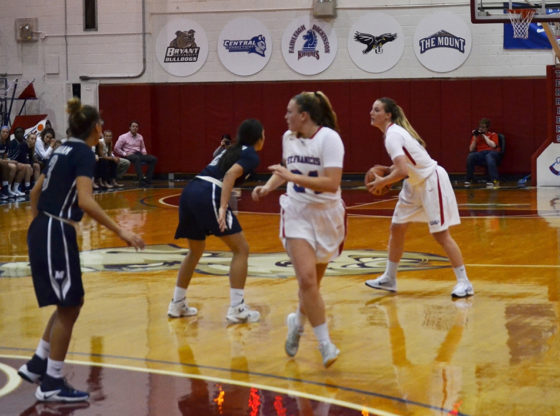 After Olivia Levey and Jade Johnson of the St. Francis Brooklyn Terriers women’s basketball team were doing a good job of keeping the score close Saturday, a 10-point halftime lead by the Boston College Eagles put them behind for the rest of the game.

Johnson — a freshman guard — scored a career-high 14 points in the hard fought battle. The Australia native has been the highest scoring freshman so far this season and averaged 17 mintutes a game in the first five contests of her collegiate career.

After bouncing back from an eight-point trail early on and trailing 16-13 at the end of the first quarter, the Terriers started the second quarter by tying the game with a three-pointer from junior forward Alex Delaney.

After senior guard Kelly Hughes and junior guard Martina Mosetti gave the Eagles a five-point lead, Johnson made a layup with 3:35 until halftime. Johnson’s two points were the last points of the half for the Terriers and their opponent quickly added points at the end, giving them a 30-20 advantage at halftime.

The Terriers trailed for the rest of the game, suffering a high 17-point disadvantage in the third quarter and finishing the game 15 points behind.

With 5:56 remaining in the game, Johnson brought the Terriers just seven points behind the Eagles with a three-pointer. However, the Eagles didn’t let them get any closer as they added a massive amount of points in the last few minutes.

Another eight points, three rebounds and one assist came from Delaney.

Hughes was the team star behind the Eagles’ win. The 5’11 senior poured 20 points into the buckets, while also putting forth a game-high 12 rebounds.

The Terriers will host the Howard University Bisons Wednesday. The teams will tip off in The Pope at 7:00 pm.