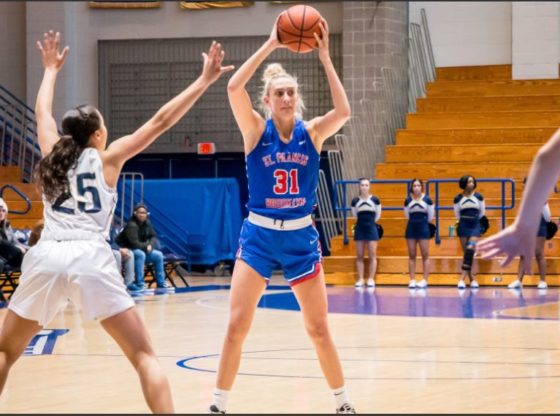 Monday afternoon the St. Francis Brooklyn Women’s Basketball Team (5-12, 1-5) fell to the Mount St. Mary’s Mountaineers (10-8, 5-1) at the Knott Arena in Emmitsburg, Maryland by a score of 60-69. This loss has extended their losing streak to four. If the Terriers intend on making the playoffs, they must improve their standing as they are currently 10th in the North East Conference.

The contest began as the Mountaineers went on a 6-2 run early in the first quarter. With a layup and free throw from junior forward Ally Lassen, the Terriers soon tied the contest at 7-7. At 2:09 Michaela Harrison, with a good layup, led the ladies from the Mount to a double-digit lead, 8-18. With 25 seconds on the clock, junior forward Abby Anderson with a layup reduced the lead to 13-20 to end the first quarter.

In the second quarter, the Terriers took the lead on an 8-0 run, 21-20 but it was short lived as the Mountaineers would regain the lead mere seconds after as they embarked on a 10-0 run, 21-30. They would go into the locker room with a 28-35 lead.

Coming out of the locker room, both teams would struggle to record any points within the first two minutes of play. With back to back layups from Lassen, the Terriers would record the first four points in the third quarter cutting the lead down to three, 32-35. At 3:56, freshman guard Nevena Dimitrijevic bucketed a long three-pointer to further reduced the lead, 42-43. On a 12-2 run, the Mountaineers would distance themselves, taking the third quarter 44-55

Entering the fourth quarter, the Mountaineers added to their lead as they went on a 4-0 run, 44-59. Within the last 10 seconds of play, Anderson with two free-throws reduced the lead to a single-digit bringing the Terriers nine points away, 60-69.

Top performers for the ladies from the Mount were Bridget Birkhead, Michaela Harrison, Taylor Addison, Aryna Taylor, and Kayla Agentowicz.

Junior guard Bridget Birkhead coming off the bench, lead her team with 16 points in 28 minutes. She grabbed three rebounds, assisted in one basket and scored four of five attempted three-pointers.

Sophomore guard Michaela Harrison finished with 13 points in 33 minutes. She also finished with one rebound, two assists, and three steals.

Junior forward Ally Lassen finished with a career-high of 27 points in 26 minutes. She also led her team with eight rebounds and landed 11 of 13 shots at the free-throw line.

Junior forward Abby Anderson finished with nine points in 32 minutes. She also finished with three rebounds, one steal, one block, and landed three perfect shots at the free-throw line.

The Terriers will be back in action on Saturday, January 25, as they host Saint Francis (PA) Red Flash at the Pope Physical Education Center, Brooklyn Heights, NY. Game tips off at 1 p.m.