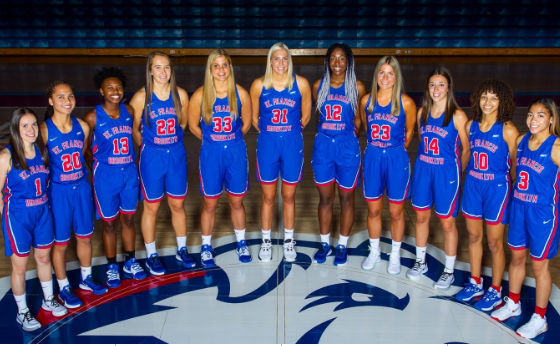 Under her leadership, the Terriers finished in the top three teams in the conference with a record of 18-13.

Cimino said: “We had a very successful first year. We won more games than the previous season and we set a record for the most conference wins in a season.”

Moving forward into the 2019-2020 season, the Terriers welcome back forward Abby Anderson, forward Ally Lassen and guard Jade Johnson. They all performed exceptionally well during the previous season.

Ally was a force to be reckoned with. She was named all-time leader in field goal percentage during single season recording 56.9% during last season. She finished number one on NEC Field Goal percentage chart. Ally also concluded her season with an average of 10.5 points per game, 5.5 rebounds per game, and 0.7 assists per game.

Jade broke the single-season scoring record previously held by hall of famer Karen Erving-Schiera by tallying 598 points. She also broke the single-season three-pointers record with 100 and recorded her 1000th career point last season. “Jade is a great player with a lot of experience at the international level and college level, she is one of the top players in the conference,” Coach Cimino noted.

In a press release, Coach Cimino added: “We are excited to announce our entire 2019-20 schedule and look forward to another season of St. Francis College Brooklyn women’s basketball.

“We put together a very competitive non-conference schedule which features matchups with Marquette, Boston College, Princeton, and a trip to the Las Vegas Holiday Hoops Classic.

“This non-league schedule will prepare us for the 18-game slate of NEC play as we expect the conference to be extremely competitive once again this season.”

Hailing from Kragujevac, Serbia, 5’3” Guard Nevena Deimitrijevic. “Nevena is small in stature but plays a big game,” Coach Cimino said. Nevena attended Druga Kragujevaca Gimnazija where she played basketball for four years. She has a lot of international experience playing as she played at the highest level with the Serbian national team. Nevena is very dedicated to the sport and practices two to three hours per day (outside of team practices). Coach Cimino said, “I believe she’s going to be a great addition to our program”

Alyssa Fisher, 5’7”, comes from Baton Rouge, LA. She attended University Laboratory School and played at Louisiana’s Finest. Throughout her four years, she averaged 20.9 points per game, 4.9 assists per game, and 4.3 steals per game. Alyssa was named to a couple All-State teams which included Louisiana High School Basketball Coaches Association First Team All-State, and Louisiana Writers Association Second Team All-State. At University Laboratory School, she recorded 1500 points. With the Terriers, she will serve as a guard. “She shoots the lights out of a ball and works really hard,” Coach Cimino commented.

Coming from Orlando, FL, Calyn Richardson is 5’6”. She attended Colonial High School where she played varsity basketball for four years. She also dabbled in track and field in her freshman year. Throughout her four years, she tallied 1548 points and was a member of the Colonial’s Varsity District Championship team in three consecutive seasons. Calyn was named the most valuable player for girls’ basketball. Coach Cimino said that Calyn is a very athletic guard and she would help the Terriers in their backcourt play.

All the way from Charlotte, NC, is Jada McMillan. She is 5’7” and will serve as a guard. Jada attended Concord First Assembly and there she played varsity track and soccer for one season and basketball for four years. Jada recorded an average of 15.5 points per game, 5 rebounds per game, 6 assists per game and 3 steals per game. During her first season, she was named the most valuable player. Similarly, to Calyn, Coach Cimino said, “Jada is an athletic guard that will help us in our backcourt.”

Junior Danae Barkley is 6’2” from Newton, PA. She is a two-sport student-athlete as she is also a member of the Terriers Women’s Volleyball Team. She is an active member of St. Francis’ Student-Athlete Advisory Committee. Before St. Francis College, Danae attended Council Rock North where she played varsity basketball. She also played for Princeton Volleyball. Coach Cimino said, “Danae Barkley will help us inside with her height and her ability to rebound and block shots.”

Transfer student Marta Zori is a 5’8”. She comes all the way from Badalona, Spain where she attended IES La Llauna. After, and then went on to Jefferson College. Marta played for CB Granollers and was a member of the Catalan Championship in 2016. She was named to Second Team NJCAA All-Academic in 2018-2019. Although Marta suffered a preseason injury, Coach Cimino believes she will be a great addition.

Melody Van Ness is a 5’7” Junior from Somerville, NJ. She attended Somerville High School and previously attended UMBC before coming to St. Francis. Melody started on Girls’ Varsity basketball team and was the All-Time leading scorer in Somerville history with 1732 points. She was named starting captain. She was All-Conference, All-Area, and All-Group-3 winner. Coach Cimino said that Melody is a tremendous player, very athletic and smart. Coach Cimino also said that she is a great athlete and will be a great help.

“Alyssa’s really excited and is doing a great job with our post players.” Coach Cimino said. Having coached Alyssa at Binghamton, Coach Cimino believes that she knows her expectations and style.

The Terriers will kick off the season on Tuesday, November 5, at 7 p.m. against America East opponent, Stony Brook from the Pope Physical Education Center. “We’re really excited. We played a really good game last year against Stony Brook and we’re hoping that we can redeem ourselves and get the win on our home court,” Coach Cimino said.

On Friday, November 8, the Terriers hit the road as they go to Marquette, their Big East rival. Continuing, they visit Boston College of the ACC on Sunday, November 10. Coach Cimino said that they will be challenging themselves with these two road games.

In the new year, Terriers tips off their conference games on their home court on January 2 against Fairleigh Dickson.