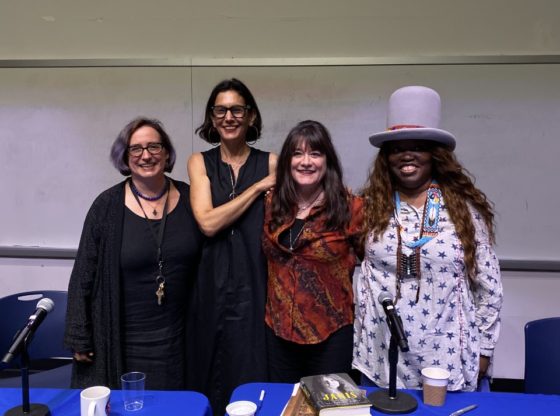 Three successful women from the music journalism industry sat down in the Maroney Theater at St. Francis College for a panel discussion on “women in rock.”

“Never give up … if you really are passionate about something you just have to keep steam rolling through and be able to deal with rejection and people dissing you or not giving you the time of day,” said Holly George-Warren, two-time Grammy nominee and an author of 16 books.

George-Warren continued: “It’s hard and it kind of puts you down but, you have to jump back up again and just keep going for it … I’ve been writing now professionally for a long time and it’s still hard, it never gets easy, it never becomes like clockwork, you still have to work very hard at it and keep pushing through.”

The women discussed their careers and the hard work that was put into getting where they are, and the setbacks they faced because of their gender.

Linden was able to get to know Amy Winehouse on a friendly level and write about her.

“There have been messes throughout musical history and I think that if had she been a man, how what a mess she [Amy Winehouse] was wouldn’t have been as much as an issue,” said Linden

The Rock and Roll industry has always been dominated by men, and so when woman was successfully able to break through, they were criticized harsher than the males.

“Women, we are looked at through different lens,” said Linden.

Kandia Crazy Horse said: “The thing was that I was just kind of isolated, I had no mentors, I looked up to Amy a lot.

“I had seen Amy on TV and I knew about a few other women, but there was nobody who had done what I was trying to do.”

Although it wasn’t easy, these three women were able to prove everyone who doubted them wrong.

“A common theme of the panel, at least one that I took away from it, was that some female pioneers of Rock and Roll, like Joan Jett and Pat Benatar, shattered typical stereotypes in the genre by being themselves on stage,” said David Schoen, an attendee of the panel.

“However, fame was detrimental to some rockers, like Janis Joplin and Amy Winehouse, as it had been for some male rockers too …

“Sometimes substance abuse and mental health issues run beyond gender in the music industry, but many women had to overcome additional prejudice that some men never encountered.

“It was so inspiring to hear from these iconic music journalists because of their fascinating stories and due to their overcoming of adversity.”