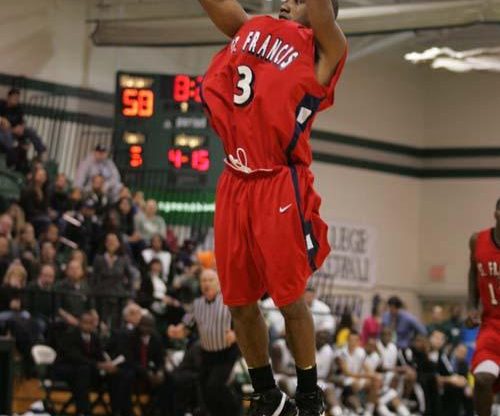 Head Coach Glenn Braica said, “He understands the school, he is really motivated, he is young and energetic, and a great addition. I think he really understands what SFC is all about.”

Womack graduated from SFC in 2008 with a degree in Political Science. As captain of the Terriers, he joined the 1000 point club, while simultaneously serving as president of SGA.

In a 2011 article written by SFC Today on Womack’s return, he said that when he arrived at SFC he did not meet the Proposition 48 NCAA standards to receive a full scholarship to play college basketball.

When Professor Sennick told him to, “focus and make something of [himself]” Womack refined his work ethic that he is so well known for today.

“Most people don’t know I paid for my whole first year of college. All I really did that year was my studies and St. Thomas [More] Pre-Law [Club],” he said.

Womack went abroad to play professionally on Finland’s Porvoon Tarmo team and then for Italy on the Vis Overt Reggio Calabria team, where he won his first big sports championship.

Womack returned to the school in 2011 when he took the helm as Resident Director for the dorms at the St. George Hotel, where he has watched the growth of hundreds of other students like himself.

“I saw it as a way to have a big impact on students’ lives. I love helping people out and making the transition to dorm life comfortable and entertaining for students, and it was a great way to do that,” said Womack.

Though this promotion to join the Men’s Basketball coaching team is a major opportunity for him, it will not be easy to leave Residence Life.

“Student Affairs is one of the best teams here at campus. Ruben, Dean Howell…they really work hard and they are more than just workers, they’re like a family to me.”

It was a tough decision to make and I’m always going to be there to help them as much as I can in any way volunteering.”

Womack said, “I’m very excited to switch over to men’s basketball, this is something I’m very good at…I played professionally and won a championship…I just felt it was time to transition into something that I think I will be successful at in the future.”

When asked about whether he thought the school and team would be receptive to his new position, Womack said, “I think the guys are excited for me to join… I’m close to their ages so you know it’s not too far along before I was on this court just like them practicing and trying to win a championship.”

His expectations for the team next year?

“I expect us to play hard and show the fans that every possession counts out here.”