Will He Divide Us?

Home /News/Will He Divide Us? 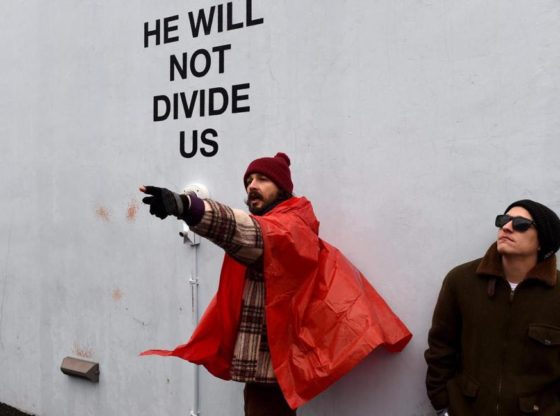 Ever since the election of President Donald J. Trump, there has been a ton of backlash within the country, especially after all of the executive orders that the President has signed. To name a few, he has repealed Obama Care, aka the Affordable Care Act, he as issued a travel ban, and another to progress the building of the Dakota Access pipeline.

There have been a lot of people protesting against the president. Even some celebrities have spoken out against him, Meryl Streep being one of the most known advocates, because of her Golden Globes speech. Another celebrity that has taken a stance against President Trump is actor Shia LaBeouf.

Shia LaBeouf is an American actor best known for his roles as Louis Stevens from the Disney Channel TV show Even Stevens, and Sam Witwicky in the Transformers franchise. Speaking out against the President, LaBeouf started a 4-yearlong live stream. The live stream project is called “He Will Not Divide Us”, and can be seen on the HeWillNotDivide.Us website, which will broadcast the video all over the world. The question is: Is Shia Labeouf a unifier or a protestor?

The location of the live stream is right outside the Museum of Moving Image in Astoria, Queens New York. The Museum in conjunction with Shia and his constituents came up with this idea to keep it as an outdoor exhibit. The Museum is known for taking on creative and artistic projects like “Arcade Classics: Video Games from the Collection,” and “Jim Henson’s Time Piece”.

The location of the live stream is so hidden, that you wouldn’t even know that it was a place to gather and protest. The site has a small wide-lens camera with a microphone placed on the wall, in addition to “He will not divide us” spray-painted on the wall.

If you look at the live stream protest while Shia is there, everyone looks like they are having a good time and having fun, and like regular protests everybody is working together.

Even little kids were chiming in waving signs and saying, “He will not divide us”. There was a man carrying a beats pill who went up to the camera saying, “Everyone there is still hope Bad and Boujee is still the number 1 song in America!!” and then started to play the song.

These are the kinds of things you wouldn’t see in a normal protest, which makes this live stream that much more important. It makes people have a feeling togetherness and joy, instead of things getting violent, which a lot of these protests can take that turn.

Recently a video of a young man started to pop up on social media. Who also went on the camera and spoke his mind about being a Trump supporter. He stated all his ideas and reasoning’s about what makes him support Trump and his policies.

He said that we don’t need to have all this violence, all we need to do is talk to one another, start a conversation instead of harming one another. Which is another reason why the “He will not divide us” movement is a good thing because everyone can go to that camera at any time of the day and basically speak their mind.

Now with every good thing there the bad. There are people out there that like to mess around and make good things sour. There were multiple accounts of people pointing out their own views, now usually that is not a bad thing. Everyone has that right to believe in whatever they want, but these people were basically trying to cause a scene.

There is footage of Shia yelling in the face of another man who was causing a scene basically stating very pro-white supremacist remarks, and Shia shuts him down. Shia also got arrested on a suspicion of misdemeanor assault and harassment for allegedly pushing a man causing a scratch on his face and making him falls to the ground.

On February 10, 2017, the Museum of the Moving Image abandoned the project, which is said on the “He Will Not Divide Us” website. It is believed that the museum didn’t want all of the bad publicity.

On the Museum’s website they placed a press release explaining why they had to shut down the exhibit. Stating “The installation created a serious and ongoing public safety hazard for the Museum, its visitors, staff, local residents, and businesses. The installation had become a flashpoint for violence and was disrupted from its original intent.”

“It was cool while it lasted, met some really cool people and really horrible people. Both sides definitely gave me a new political and personal perspective for better and worse”, Evans Alexandre said a frequent goer. Evans was one of the people that was there during the yelling of the white supremacist and when Shia was arrested.

“Still can’t believe there’s legit white supremacy right here at home, from seemingly unsuspecting, good people too. It’s a shame it basically became a battleground between liberals and conservatives, and it’s a shame that Trump supporters trolls and Nazis (all NOT one in the same) felt so compelled to ruin it for people just trying to spread peace”, Alexandre went on to say.

There is also footage showing Alexandre seeing Shia coming back to the site after being arrested giving him a handshake. “Shia is one of the most down to earth people around…Shia has some serious passion and the thickest skin to the most human degree. You can only take so much crap from people before losing it; regardless I have mad respect for him”, Alexandre said.

On February 18, 2017, the project relocated to a wall outside the El Rey Theater, Albuquerque; it’s Found on the “He Will Not Divide Us” website. Shia LeBeouf is a unifier. He gave people a way to peacefully speak their minds 24/7 for 4 years, no matter what political stance you take.

This live stream was meant to say that the United States of America would be together instead on hating one another. Unfortunately many people did not try to grasp that concept and took this seemingly peacefully idea made it into a battleground.

Clearly Queer: How the Queercore Genre has Taken Over Punk for the Better
Breaking Point