WHAT MAKES YOU BEAUTIFUL? 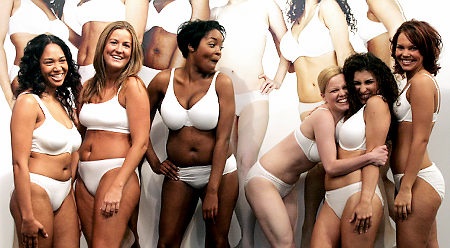 What is beauty? What is sexy? What is self- esteem? All of these are open to interpretation and opinion.

Everywhere you look, there are fragments of media haunting us. Whether we are walking down the street, driving in our cars on the highway, or riding on a train, everyday there it is: the advertisements motivating us to be “thin.”
Most men and women are bombarded with the images of what it means to have the “perfect body.”

What is the “perfect body” anyway? Basically, the only image worth recognizing as beautiful are those who are thin, with perfect proportions, perfect legs and abs; “the elite,” “the ideal.” These media aspects all manage to poison our minds.

The magazines advertise and promote the usage of dieting programs for women and steroids for men. Advertisers slap you in the face with airbrushed bodies and digitally formulated ideas.

Many toys that children play with can have a corrupting influence on their growing minds. Toys such as barbie dolls and GI Joe, give young children their first image of what men and women “should” look like.

Roseangela Fracchiolla said: “The media has become this machine that always produces this set idea of what a person should look like, speak like, and act like…it’s really rare to see someone who is just like me or my friends in a magazine.”

Today, many people idolize celebrities, and tend to think that people who look like the Victoria Secret or Abercrombie models hold the key to a happy successful life.

Media plays up the fact that if both men and women, lose those pounds, if they follow those trends, that their lives would somehow be perfect. If we look a certain way, we will have the perfect relationships, the perfect marriage, the perfect friends, the perfect car, the perfect house– the perfect lifestyle. But aren’t we all taught to believe that perfection doesn’t exist?

Media puts so much emphasis on being thin; that it actually has been exhibiting the opposite of what is healthy. This notion can cause consumers to diet, or starve themselves. People neglect their body’s natural formula, all to give into the horror that is; The Media Beast.

Magazine after magazine, billboard after billboard, associates being thin or buff with a glamorous life. However, that “glamour” will soon fade for some.

Statistics estimate that 8 million Americans have eating disorders; 7 million women and 1 million men. Eating disorders usually occur during the late adolescence and the twenties. Statistics also show that 1 in 200 American women suffer from anorexia, while 2-3 in 100 American women suffer from bulimia. And, an estimated 10 – 15% of people with anorexia or bulimia are males.

Research shows about 80% of women are unhappy with their appearance, while about 70% of men are unhappy with their appearance. As statistics also show that as many as 10% of college women suffer from a clinical or nearly clinical eating disorder, including 5.1% who suffer from bulimia nervosa. Studies indicate that by their first year of college, 4.5 – 18% of women and 0.4% of men have a history of bulimia. And as many as 1% of females between the ages of 12 and 18 have anorexia.

It is a fair assumption to make that the venomous media targets women way more than men. These models and celebrities create such a high standard that is nearly impossible to meet. Research shows that in advertisements today, models weigh 23% less than the average woman.

The fashion industry has glorified what a woman “should look like”. Because women make up such a large percentage of today’s population, it tends to affect women all over the globe; all woman of all different backgrounds, appearances, and personalities. The pressure for girls and women to fit that certain image, is threatening. It affects their own opinions of themselves, and can cause them to lack self-esteem; making them insecure about who they are, and whether or not they deserve to be called beautiful.

Most magazines, billboards, movies, and television shows portray girls as beauty queens. In reality, no one really looks perfect every minute of everyday. Not even celebrities or models; who usually are airbrushed when photographed, and who are equipped with having a hair and makeup artist, personal trainer and chef. Not everyone is perfectly thin, has the perfect sized nose, or a perfect proportionally crafted body.

Urban Outfitters released an extremely controversial t-shirt that sent a very disturbing message for customers to ‘Eat Less’. After receiving lots of bad publicity, the shirt was quickly pulled from the company’s online store.

Actress Sophia Bush drew attention to this as she said, “Ladies! This is OUTRAGEOUS. I hope none of you will stand for being told such a thing, in such a way. Being healthy, eating right, and staying active is one thing. Being told to starve yourselves by a fashion company? Not cool… It’s like handing a suicidal person a loaded gun.”

However, these hurtful fashion images are the things that serve as “role models” for the world. Every media based product is telling the public all the ways they can get that idealistic look. What products to buy, what trends to follow, what easy ways to lose weight, or ways to look younger, the list goes on and on.

No one should change for the pleasure of anyone else, or fit a computer generated image. If a person is happy with how they look, and he/she is healthy, nothing else should matter.

American plus-size model Kate Dillon said, “I firmly believe that what makes you sexy and beautiful is not the size of your body or the color lipstick you have on. What really makes you sexy is what you project, your confidence, and your self awareness, having a great sense of humor and being really smart.”

Beauty is not just based on one’s appearance, it’s based on who you are as a person.

Everyone is different; everyone has a different way about them, something unique that makes them beautiful. Letting anyone take that away would be a crime. Perfection is an unrealistic notion, because no one on this earth is perfect.

The media should learn to portray healthy, charitable women who are trying to make a difference in the world; those are the proper role models the youth of today should aspire to be like. This shows the audience that not everything is about body image; it’s about being an overall healthy person.

However, the sad truth of the matter is that sex sells, and is good for creating business revenue and profits, which is the main reason for the media promoting such an “ideal image” in the first place. Businesses are making money off of the lack of confidence some people feel, due to those advertising campaigns and harmful messages; it’s a vicious cycle. Think of all the time and money one wastes on perfecting their body image. The dieting, and over exercising can severely harm one’s health as well as burn a hole in one’s pocket.

Photographer Robert DeSantos Jr. said, “Most customers, ask me to photoshop their appearances all the time, women want skinnier bodies, or more youthful appearances and men want more muscular bodies, about 65% of my work tends to get photoshopped.”

It is a frustrating yet controversial topic that is always evident in our society; and it is difficult to fix such an issue as this, because the media is everywhere. The media affects the average person daily.

There really is no way to prevent it, or make it go away but there is a way to try and ignore it, and make your own image of beauty; one that is not just based on appearance, but that is based on you and what makes you beautiful.