What Is Hedera Hashgraph and Why It Matters

Home /News, Opinion/What Is Hedera Hashgraph and Why It Matters 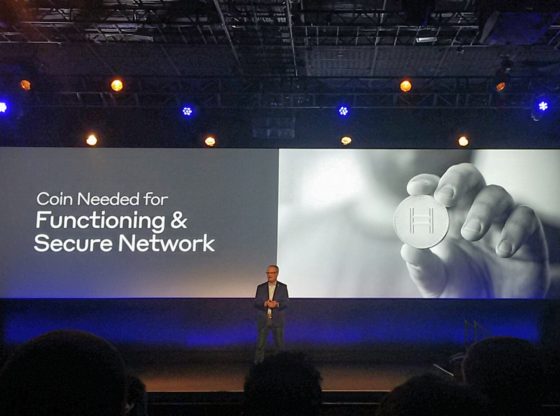 Cryptocurrency start up Hedera Hashgraph announced its public ledger at a launch event on the evening of Tuesday March 13.

Despite the controversy surrounding it, cryptocurrency has been booming.

Developed in 2009 by an anonymous developer, the first decentralized cryptocurrency was bitcoin. Bitcoin is a digital asset not backed by the government. Rather, funds are fixed in a public key cryptography system in which only the owner of the private key can make cryptocurrency transactions.

Today, there are dozens of cryptocurrencies. One of them is H bar, a coin created for use by Hedera Hashgraph.

Hedera Hashgraph held a conference at Playstation Theatre on Tuesday March 13, 2018, an event that sold out one thousand seats within nine hours.

At the conference, Andrew, a student from Cooper Union, said “Hashgraph is 3-4 orders of magnitude faster than any of its crypto competitors to date”.

Hashgraph President, Tom Trowbridge, was the first speaker. He greeted the audience and thanked investors and partners: big-fintech, TxMQ, OpenCrowd, ABACUS, and PwC to name a few.

Trowbridge rattled off several accomplishments of the cryptocurrency start up: the Hashgraph global community has 239 ambassadors based in 42 countries and in 71 cities. Ambassadors link, engage, educate, and inspire. They have hosted over 30 events attended by thousands in 20 cities in 8 countries.

“What are we talking about tonight? …Public ledger…cryptocurrency…governance – for technology this powerful, we need to have a strong governance model” Trowbridge said.

Trowbridge then introduced the audience to Mance Harmon, who discussed the importance of a public ledger and addressed governance in cryptocurrency, and Dr. Leemon Baird, who has a lengthy list of credentials. To name a few, he earned his PhD in Computer Science from Carnegie Mellon University in less than three years and is a current research scientist in the Air Force Research Laboratory, and at the Academy Center for Cyberspace Security.

Baird and Harmon are the Co-Founders and CEOs of Swirlds, a software platform. The two met at a computer lab in the Air Force while working for a senior scientist for machine intelligence in August of 1993. They’ve collaborated ever since, working with one another for over twenty five years.

Trowbridge described them as “teachers by nature”.

In regards to the Hashgraph launch, Mance Harmon said he has “been looking forward to this moment for three years – believe it or not…

“I remember…sitting with Leemon just listening to his latest thoughts about how to solve this problem. I remember him telling me time and time and time again – convincing himself – that it was impossible to achieve the technology he envisioned.

“But then in the summer of 2015, he had a breakthrough. Today, we call that Hashgraph. We first used Hashgraph for enterprise applications, and we developed the code base to be enterprise gray for those customers. But we always knew that was just phase one. And we were patient, thoughtful, sober-minded, and made plans for phase two. Tonight, I am pleased to introduce you to Hedera”.

Cryptocurrency goes hand in hand with a public ledger. A public ledger has four requirements: technology, security, stability, and governance.

“In terms of security, Hashgraph has an algorithm that achieves a gold standard…called asynchronous byzantine fault tolerance” Harmon said.

Asynchronous byzantine fault tolerance, a key component for blockchains, is the reliability on a fault-tolerant system.

“Practically, what that means, is that Hashgraph is resilient to distributed denial of service attacks that other platforms simply aren’t. Any platform that has a leader or coordinator, or some type of synchronous process that it depends on, is susceptible to attacks.

“In addition, Hashgraph addresses a whole set of concerns that other platforms don’t even consider today. We refer to this property in Hashgraph as fairness. It brings fairness to the consensus system itself. It ensures that transactions actually count as happening when they reach the network.

Hedera is transparent to the point that the source code is open for public review with version 1.0, and incorporates open consensus.

The software that users develop will belong to the user/owner; it can be licensed however the user/owner wishes, and will not be encumbered in any way by Hedera.

Baird and Harmon anticipate to open up the network as early as May of this year.

In regards to the H bar, “Of course there is a token, a coin, associated with this platform”. Hedera Hashbrown “dramatically rais[ed] the bar” for the industry, and is symbolically “raising the H bar”.

There is a need for cryptocurrency with ledgers as it ensures the security of a network and provides needed scarcity, to prevent certain categories of attacks against the consensus process.

Don Thibeau, Executive Director of the Open ID Foundation and Chairman of the Board of the Open Identity Exchange (OIX), a membership organization that functions as “a technology agnostic, non-profit trade organization of leaders from competing business sectors focused on building the volume and velocity of trusted transactions online”.

Helen Disney, who has participated in bitcoin outreach and has been an advocate of blockchain technology. She is also CEO and Founder of Unblocked, “a hub for Blockchain events, education, and information”. She has fifteen years of experience in the industry.

Jordan Fried, former CEO at Buffered.com and current Head of Global Business Development of Swirlds Inc, which is the company responsible for the Hasgraph consensus algorithm.

All lecturers emphasized the recurring theme of “hello future” and highlighted the design and programming that set Hedera apart from other blockchain architectures.