What do students think of St Francis College? 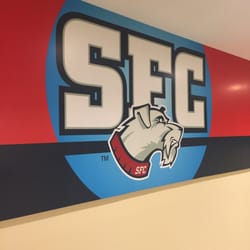 St. Francis College, home to the Terriers, is a relatively small college compared to others in NYC.

Despite its size, the college makes big promises that it can keep its students happy and successful now and after graduation.

I wanted to find out for myself, since I am a new transfer student coming from another college institution.

Do students feel fulfilled? Are they actually happy with where they’re receiving higher learning?

So in a quest to find out, I went around asking some of my classmates and stopping random students in the hallways to get the real inside scoop about this college.

“They had good counselors and opportunities for my major.

“I heard that there’s a lot of internships and professors at the school had worked in the media/journalism industry so they can offer advice and put you onto people who can help you.”

Leah also said she likes the college: “I really like it, I feel totally comfortable, I don’t sense any negative energy at all.

“The professors are super-duper nice and the environment is just overall caring; the people out here really look out for you.”

Transfer student Hector Boyce has no complaints either: “I have no complaints honestly, I mean I actually like it, it’s a little bit of a different environment from the two previous schools I’ve been to.

“It’s pretty nice, the facilities are pretty cool. Compared to the schools I’ve gone to, so far its seems better and the work seems easier.”

Swimmer Steve Brennan, who chose SFC because of the IT program and the swim team, said: “I honestly like it a lot.

“The reasons are mainly because I tend to learn better in smaller environments so the classroom sizes that are not full of 30-40 people is helpful.”

One student, who asked to remain anonymous, said the college is nothing special: “It’s an campus on a block.”

And another student who asked to remain anonymous said: “I don’t love it but I don’t hate it. This school doesn’t really don’t do anything for me.”

Third year student Gaby Rivera shared her thoughts: “Honestly, I’ve had ups and downs with the college. They do a lot of things well but there’s so many things that need to be improved.

“There’s a lack of promotion for the clubs here, I feel like the clubs the school has are only promoted during September then you never hear about it again because the school only cares about athletics.”

I also asked my peers what they felt about other students and the overall atmosphere here at SFC.

There were mixed thoughts. See the responses below.

A) “The students are pretty cool and friendly. They’re so friendly that they’ll just come out of nowhere and talk to you for no reason at all.”

B) “The students are chill. There’s nice people here.”

C) “The students and the environment are pretty great. Everyone’s nice and willing to help you.”

D) “If I can rate the environment, it’ll be 6 out of 10. Everyone’s very cliquey. You walk into the cafeteria or lounge and everyone’s just sectioned off and just looks at you like you’re weird. It feels like high school.”

E) “The school is diverse, there’s a lot of different people there of different backgrounds but you can tell there are a lot of cliquey parts. Some cliques don’t really include other people and it’s kind of off-putting to see. Another thing is that the sorority and athletes are all together and not really mixed in with other people.”

I then asked students if they recognized any downsides of the college.

Some students felt that the “media department does not cover enough that goes on in the school.”

On a similar note, another student said: “I feel like they don’t push you to go out to any events. They don’t make anything exciting. All the events that are in the cafeteria are a little too wild for me so I don’t attend.”

That being said, there seemed to be a consensus when I asked about opportunities available at the college.

The students I interviewed seemed to be aware of and appreciative of the connections that SFC has.

From what it looks like, most people said St. Francis does its job as a college and creates a friendly environment.

Of course there’s room for improvement, but you can’t please everybody — right?

The Troupers of St. Francis College Present Significant Other
I am a DJ – I am what I play