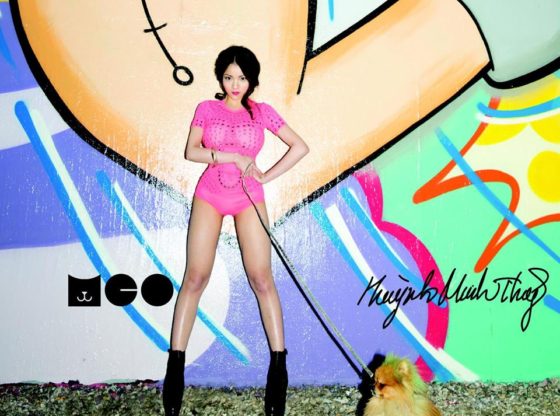 Griffin has produced music for artists like Kanye West, John Legend and Madonna.

Top, as she is referred to, is petite, infinitely stylish and a walking example of fame. Her most recent album entitled ‘MEO’ is contemporary R&B with a mix of pop, which was released on Jan. 4 of 2014.

This album is markedly different than other Asian crossover artists like PSY, know for ‘Gangnam Style,’ or the Korean pop group Girls Generation.

Top is in her own class of music and style and is bridging her country’s culture and style with her new experiences in college and soul searching adventures in NYC.

Her fame back home does not get to her head or haze the values her family instilled in her, and when it comes to school she is insistent on completing her degree. Top is proud to have been on the Dean’s List for the last two semesters.

For her, college is not just about getting a degree but about discovering yourself.

Top said, “The key of life is discovering yourself because some people get lost.”

Top rose to fame in Vietnam at a very young age and is the daughter of two supportive Ph.D’s.

“If you don’t have a good base the house will collapse,” she said, meaning that her family supported her and guided her by permitting the benefits of fame with the consistency of an ordinary person.

Sitting at a lounge in Brooklyn speaking with Top about her new CD was rather easy to do on this side of the world, but she gave the impression that if we were in Vietnam this would not be able to occur.

Top is fairly anonymous in NYC as well as the rest of the country because her fame has been contained to the borders of Vietnam. Though her routine is particularly stressful, Top said she loves working.

Top carries on through SFC surreptitiously, while the famous musician persona she lives in Vietnam are relatively unknown to professors and students alike.

She does not worry that faculty and students do not know her real identity, because the direction her new album is heading in Vietnam, is all that matters.