WATER POLO EXCELS IN POOL AND IN CLASS

Home /Sports/WATER POLO EXCELS IN POOL AND IN CLASS 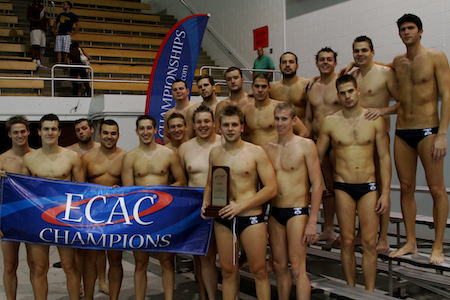 It’s 4.30am and 18 players of the men’s water polo squad and their coaches from St Francis College are waiting on the corner of Court and Remsen for their bus to shuffle them to the airport.

A five-hour flight to California is followed by a two-hour bus ride to their first match of a very long weekend. Such is life for the men’s water polo team.

The five games in this particular tournament may not count in the conference standings affect the team’s chances of achieving their ultimate goal this season — a trip to the NCAA final four, but it will be an important test of how much progress the team has made so far this year.

Going to the final four is a big deal for any school’s program. This has only been achieved at St Francis College one other time — by the 2005 team coached by Carl Quigley.

Current coach Igor Samardzija said the team’s success boils down to the commitment and dedication they pour into every three-hour evening workout as well as their educational efforts — the men’s water polo players also manage to maintain the highest GPA for all the teams in the school.

Samardzija is the main proponent for his athlete’s good grades, stating: “Maintaining a 3.75 GPA is the goal and anything less than a 3.50 GPA is simply unacceptable.”

This is not an easy task to ask of any athlete, let alone a group of guys who are mainly from Eastern Europe and for whom English is a second language.

Samardzija’s squad is off to an excellent start this season that includes key victories over conference powerhouses such as Navy, Princeton, Bucknell, as well as winning the Eastern College Athletic Conference (ECAC) championship.

These accomplishments are all just stepping-stones and the players, along with the coaching staff, will be the first to tell you this.

Samardzija’s ambitions for a final four appearance in 2010 are not for reasons you’d expect from a coach in his second season at St Francis.

“I want to bring the school more recognition on a national level”, Samardzija (right) said.

He said there are a number of schools in California who are aware of the successful water-polo program in Brooklyn but if you were to ask other colleges nearby in the New York area you would find that most people aren’t aware of the nationally ranked Terriers.

Even some students at SFC are not aware of the water polo team’s standing and too few of them show up at a match to voice support.

Players Josip Jurcevic and Boris Plavsic joked about the time a junior at St Francis asked how they got the horses in the pool to play water polo.

RESCUE THE RIDERS
LILY’S GOT THEIR BACK