VOLLEYBALL’S VICTORY AGAINST FDU; 2-3 IN NEC 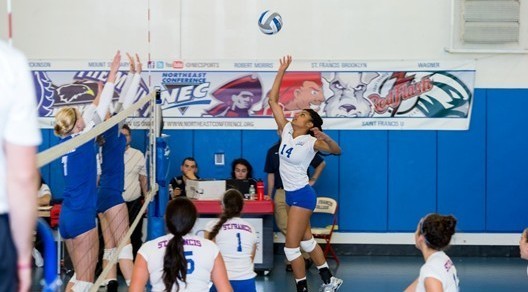 This leaves the Terriers 6-17 overall and 2-3 in Northeast Conference play.

Leading the Terriers in kills was Domenique Gerard with 15.

Leah Zitting and Gerard brought power to the first set, which led to the Terriers winning 25-19. Slavica Stefanovic was taken out of the game due to an injury to her right ankle.

The Terriers had a tough time with the second set. Farleigh Dickinson led for most of the set. The Terriers were given a yellow card for a delay of game due to players being out of rotation. The Knights were leading 24-23 when the Terriers tied it. Zitting landed a kill to make it 25-24, with a win by two.

Farleigh Dickinson was leading the third set, and SFBK, 14-9. The Terriers cut the deficit to 15-14. Zitting had a hard time spiking the ball over the net for most of the set. Niehely Sosa tied the match 15-15 with a kill right in the middle of the defenders.

Terriers were up 20-17 when Zitting went to serve. Sosa had another kill which left the Terriers up by four points; 22-18. Due to a fault by the Knights, it is match point for the Terriers. The Terriers won the set 25-22.

The Terriers opened the fourth set weakly. The FDU Knights went on a four point run, but the Terriers reciprocated and got an 8-5 lead. After a constant back and forth struggle for power, the Terriers led the Knights 22-18. The Terriers won the set 25-19 with a kill from Maggie Niu.

The Terriers are back in action tomorrow Oct. 13 at 1 p.m. against Sacred Heart University.