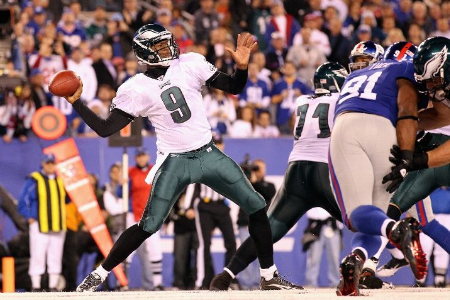 Despite having a new role on a new team, Vince Young is still finding ways to torment the New York Giants.

Filling in for an injured Michael Vick, Young made his first start since Nov. 21, 2010 and helped orchestrate a 91-yard drive in the fourth quarter to help the Philadelphia Eagles (4-6) defeat the Giants (6-4) 17-10.

Young, who played for the Tennessee Titans last season, finished the game with 258 passing yards with twotouchdowns and three interceptions.

Philadelphia took a 10-0 lead in the second quarter when Young found former New York Giant Steve Smith in the end zone. For Smith, it was his first touchdown reception of the season.

New York would tie the game in the fourth quarter, however, when Eli Manning connected with Victor Cruz for a 24 yard touchdown pass. Cruz led all receivers with 128 yards.

On the following drive, Young led the Eagles on an 18 play, 91-yard drive that ended with a go-ahead touchdown pass to Riley Cooper. On the drive, Young passed for 67 yards and ran for four.

Young is now 3-0 in his career against the Giants, his best record against any team in the NFL that he has faced more than once.

New York’s offense, continued to struggle. The team was only able to rush for 29 yards and Manning committed two turnovers. Manning’s second turnover, a lost fumbled, occurred on the Eagles 21-yard line with just 1:17 left in the game following a 47-yard catch by Cruz.