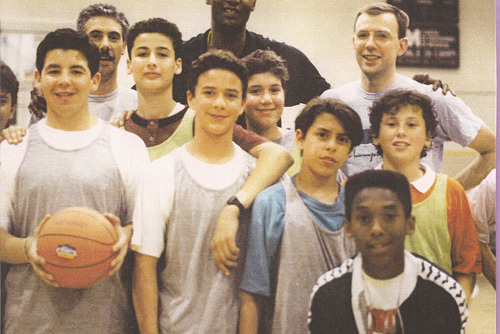 The devastating news of Kobe Bryant’s death, together with his little daughter Gianna and other seven people, shocked the entire world.

For many people living in the northern Italian town of Reggio Emilia, where a square will be named after him, it felt like losing a hometown son, an old friend.

Bryant’s adventure in the world of basketball started right there, in the heart of Italy, following the footsteps of his father, Joe “Jellybean” Bryant, who moved with all the family in the little town of Rieti in 1984, when Kobe was only six years old, to pursue his career as a professional basketball player.

Rieti was just the first stop, followed by Reggio Calabria, Pistoia, and finally, Reggio Emilia, where Joe won the “Player of the Year Award” for two times.

A total of seven years, in which Bryant “fell in love with basketball,” rolling his dad’s tube socks and “shooting imaginary Game-winning shots in the Great Western Forum,” as Bryant declares in his retirement letter entitled “Dear Basketball.”

“When he was only six years, Kobe used to jump off the balcony of his parents’ house and run to a church playground, where he would spend hours just throwing a ball in the basket,” said the journalist Andrea Barocci, who wrote the book “An Italian Named Kobe.”

“We really just let him play because he was younger than the other kids in the youth side, but you could see he was a pure talent, a free spirit,” remembered Gioacchino Fusacchia, who coached Bryant in Rieti, in an interview for the “Los Angeles Times.”

Davide Giudici, a longtime friend of Kobe, added that “At the end of our training, the rest of us would just go watch TV or do other things. Kobe, instead, would go home and keep training with the basket his father put up for him in his garden.”

In the years to come, Bryant always declared to have benefit from Italian-style basketball coaching, mostly focused on tactics:

“Passing, screening, moving off the ball, shooting, all the basics,” he said in an interview for the online basketball publication SLAM.
“And if we did scrimmage, we’d scrimmage full-court, no dribbles allowed. So that set the foundation for me for how I came to understand the game, and how I now teach the game.”

The Bryants left Italy in 1991, and Kobe moved on to become a legend and one of the most inspiring NBA players in history, but he never rejected his Italian roots.

“In Italy, I’ve learned the love for life, family, and for children, that’s why it’s in my heart.”

Bryant spoke perfectly Italian, and he took advantage of this skill on some particular occasions, also showing Kobe’s qualities as a leader for his teammates.

One of the most famous episodes happened in 2008, when Bryant’s Los Angeles Lakers were contending the NBA title against Boston Celtics.

The Lakers were leading the match 88-82, and with only 23.8 seconds remaining to play, every single possession was crucial.

Sasha Vujačić, a shooting guard from Slovenia, scored the first free throw and desperately needed to score even the second to seal the match.

Before Vujačić took the ball, you can clearly hear, in the silence of the TD Garden, the “Black Mamba” speaking Italian to his teammate, who has played in Italy for two years and comes from Slovenia, which borders Italy.

Despite the tension of the moment, Vujačić couldn’t hold a laugh but eventually scored the second free throw.

Bryant was also a big soccer fan, especially of the Italian team Milan.

However, Bryant showed his most significant love for Italy with his four daughters, giving to each one of them an Italian name.

Natalia Diamante, Bianka Bella, Capri Kobe, and Gianna Maria-Onore, “Gigi,” who was pursuing the same dream of her father, who sadly passed away with him in the terrible accident of Sunday afternoon.

To all of them (except for Capri, who wasn’t yet born at the time), and to his wife, Vanessa, Bryant dedicated the Academy Award for Best Animated Short Film that he won in 2018 for his film “Dear Basketball.”

He did that in Italian, in front of the world:

“I love you with all my heart.