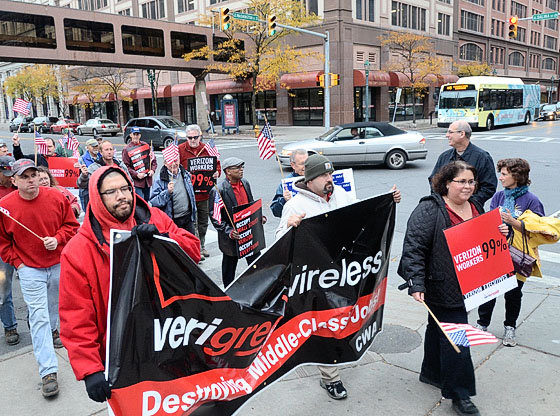 Verizon employees remain on strike – fighting for a contract renewal with the CWA union – steps from campus.

The contract between the company and the union expired in August 2015. Despite Verizon making $39 billion in the past three years, they still want the workers to make concessions.

The workers have been on strike and are staging protests outside Verizon Wireless stores, including the nearby Montague Street location.

“We are fighting corporate greed,” one of the workers told SFC Today. “Despite their record profits they demand concessions from us the workers.

“We feel this is lowering our standard of living, while the top five CEOs make a combined $243 million in compensation,” the employee added.

Offshoring jobs is also a major concern of theirs, as call centers in America are being relocated to other countries as a means to cut costs as the workers there are paid less.

Cutting health benefits is another issue they are fighting, as it hurts their standard of living.
Verizon wants to freeze pensions, make layoffs easier and rely more on contract workers, unions said.

The company is also pushing to eliminate a rule that would prevent employees from working away from home for extended periods of time, the unions added.

This is just one of countless stores where protests are taking place.

More than 39,000 Verizon workers nationwide have been protesting since Wednesday. Democratic presidential candidate Bernie Sanders marched with thousands of Verizon employees in Manhattan on the first day of the protests.

Hundreds of workers marched over the Brooklyn Bridge on Sunday.

Verizon’s reasoning behind the situation is that they are making customer service their top priority.