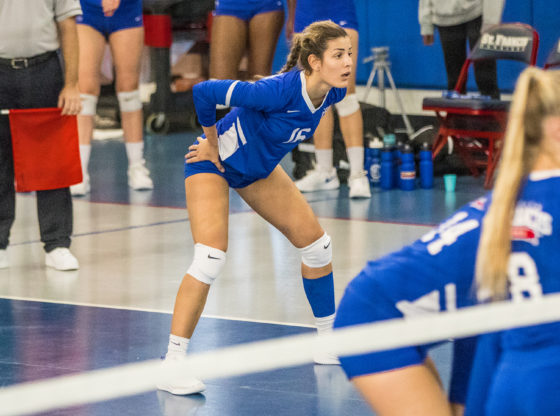 On October 22nd, Sophomore Hitter Vanja Miljacic on the Woman’s Volleyball team was named Co-Player of the Week in the Northeast Conference.

This was the first weekly award that she ever received since joining the team last season as well as the first player of the week award given to a Terrier on the volleyball team this season.

Vanja said: “I was very surprised; I knew I did good that week but I honestly was not expecting it. It was my first individual recognition and it meant a lot in a way because I have worked so hard last year and in preseason to be a player I am now.

“I am not saying I am perfect I have a lot more to work on but it is nice to know that it is on the paper also. I am very glad my team got both wins this week because at the end of the day everything I do I do it for the team.”

The last time a Terrier on the volleyball team was named Co-Player of the Week was October of 2017 by Vanja’s former teammate Aleksandra Gligoric.

“The night before that we beat one of the best teams in our conference (SHU) in 5 sets so I was exhausted but I knew we have one more win we need to get. Coaches and I have talked about what expectations they have from me and what should I do and I was doing it and it worked.” Vanja said.

Saturdays win against SFU (PA) marks the 5thconference win of the season, which is the most amount of wins they’ve recorded in conference play.

“I was proud of myself because I have put everything that I have into this volleyball program and was doing everything Coaches were asking of me since I came here. So, I was proud that I came to this point and I am very excited for what’s coming not only for me but for my team.” Vanja said.

Vanja is willing to do anything that her coaches tell her to do when she steps out on the court.

She has given credit to her coaches for helping her get to where she is in her career today and motivating her through her games.

“I was also very thankful to Coach Andy and Coach Abra. They were first people I texted because I wanted to thank them for all the work they’ve put into me.”

After Friday’s victory over RMU, Head Coach Abra Rummel had a few words to say about Vanja’s performances from the previous 3 games.

Abra said: “She’s been playing amazing. She’s been the player that I’ve always known that she is. So it’s really nice to see that kind of come to fruition”

As the volleyball season is coming to an end, Miljacic and the rest of the Terriers Volleyball team plan to make history. One goal that they are looking to accomplish this season is to make it to their first ever NEC playoff appearance.

“The goal is to make history. Our volleyball program has never gone into playoffs and that is what this team is planning on doing. We have 3 more conference games but we don’t plan on ending our season there.

The Terriers are now currently 5th  in the NEC, just a game and a half behind SHU in the playoff race.

The next game they play will take place on November 2 at 4 pm as SFC takes on their NEC rivals, LIU Brooklyn in their last home game of the season. That game is followed by the final 2 games of the season as they are on the road at Central Connecticut State University and Bryant University.

At this point, we wish our fellow Terriers the best of luck as the look to end their season strong.

Petition to save the promenade
Father Brian leaving SFC