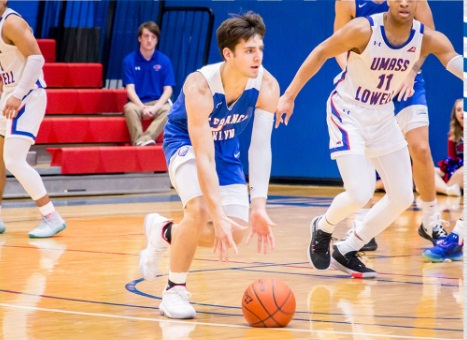 The River Hawks got off to a fast start, taking a 7-point lead within the first few minutes of the contest. Junior Chauncey Hawkins with a good jumper shot would record the Terriers’ first two points. As the first half progressed, the Hawks continued to increase their lead, leaving the Terriers struggling to come back. The first half ended with the Terriers trailing 36-45.

Graduate guard Christian Lutete led the River Hawks with an impressive 25 points in 31 minutes. He grabbed nine rebounds and landed eight of nine shots at the free-throw line.

For the Terriers, Senior forward Deniz Celen led his team with the highest scored point and rebounds for the contest. He scored 15 points and grabbed eight rebounds in 21 minutes.

The Terriers will be in action on Tuesday, December 10, at the Pope Education Center, Brooklyn Heights, NY, as they face the Presbyterian Blue Hose. Game tips off at 3 p.m.