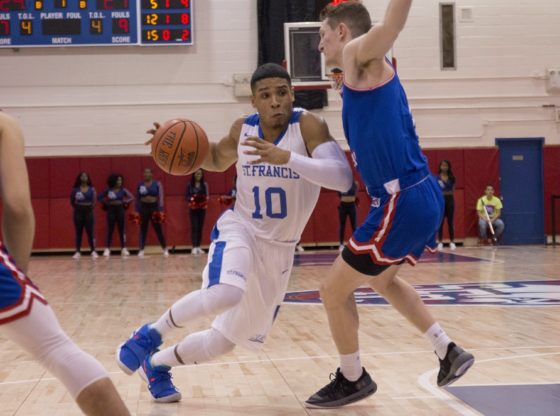 Jalen Jordan netted 21 points with 4 three pointers, Glenn Sanabria scored 21 points as well, and the Brooklyn Terriers overcame a slight deficit in the first half to knock off UMass Lowell River Hawks 69-75 on Tuesday night at Generoso Pope Athletic Complex.

However, the bigger story happened to revolve around Chauncey Hawkins, the Terriers’ 6th
man, who has been the teams go-to guy off the bench.

Hawkins provided instant playmaking and scoring as soon as he checked into the game during the first quarter.

He was one of the main catalyst in bringing the Terriers to life during the second half, getting the crowd to stand on their feet in exalt.

Christian Luette tried to get it going for the Riverhawks, earning a double-double for the night.

He scored 13 points and was able to grab 14 rebounds.

Luette was active and effective throughout the whole first half, helping his team jump-start to a 6-15 lead.

With the score at 45-44 in the 2nd half, Glenn Sanabria came off a screen from Yardayah Evans and hit a 3 pointer, putting the Terriers up 48-44.

Right after that, the Terriers got a stop on
defense, pulling away in transition.

Hawkins sprinted down the court and called for the ball, hitting another 3 pointer for the Terriers to go up 51-44.

The Terriers will have four days rest before they go back in action against a struggling 2-7 St. Peters team at home December 15.