TYREEK JEWELL ’16 TAKES ON THE PROS 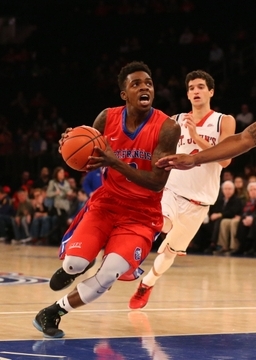 The 6’2 guard does not feel intimidated by this new challenge, but rather sees it as an opportunity to make his dream a reality.

“No challenge scares me,” Jewell told SFC Today. “I’m more excited if anything to live my dreams and play professional basketball.”

The Bronx native transferred to SFC in fall 2014 after playing in the B Division upstate at Jamestown Community College, scoring more than 1,000 points in two seasons and being named the Region 3 Division II Player of the Year for the 2013-2014 season.

He played a vital role on the Terriers men’s basketball team for the past two years, with his strong defensive skills during the 2014-2015 season and being the star player during the 2015-2016 season with 12.9 points and 5.6 rebounds per contest in addition to totaling 67 assists and 33 steals.

“I’m happy with what I accomplished at SFC, but I felt like we could have done more, especially with the talent we had,” Jewell said.

Jewell never used to think about reaching this point because he was always concentrated on his current responsibilities and goals.

“When I first started playing college basketball I was so focused on playing Division I and when I got there I just wanted to prove I belong,” Jewell said.

Although he has come so far in a short period of time, Jewell hopes to improve his skills on the court as he trains to play on a professional team.

“There’s always room for improvement so I want to polish everything and even learn something that could help me mentally become a better leader and teammate,” he told SFC Today.

Jewell knows that living overseas will not be an easy experience, but looks forward to doing so.

“Staying in a different country would be somewhat difficult I believe, but I feel I can handle it because I like to travel and meet new people,” he said.

He thinks getting drafted into the NBA is a possibility for him in the future, but knows it wouldn’t be a simple journey.

“Anything is possible, but I know how hard I have to work to get to the NBA,” Jewell told SFC Today. “But I feel I do have a good chance, but for now I’m going to focus on making a good impression my first professional year.”