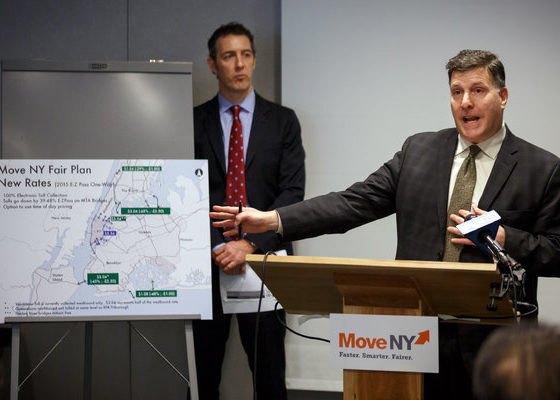 A plan has been proposed by the transit group Move NY to add tolls on all bridges and tunnels leading to Manhattan, in an effort to decrease the MTA’s debt and congestion on the crossings.

Although this toll has many New York commuters up in arms, dropping tolls on these congested bridges will lower the tolls for drivers in the other parts of the city.

Campaign Director Alex Matthiessen calls this a “toll swap”, and told WCBS that the plan “asks those drivers who are paying nothing to cover the most congested and transit rich part of the city to pay their share.”

The toll would cost $8 each way for drivers paying cash, but drivers with an E-ZPass would only pay $5.54. According to supporters of the toll swap, it could produce $1.5 billion each year the toll is in place and this money can go towards upgrading mass transit. The MTA is currently $34.1 billion in debt, and this could relieve some of that debt.

While it would generate money, the toll could also control the traffic that flows to and from Brooklyn and Manhattan. Much of the congestion is caused by commuters who take the bridges to avoid tolls. The new plan could potentially spread out the traffic, and decrease congestion.

Former mayor Michael Bloomberg proposed a similar plan in 2008, which would have charge drivers entering Manhattan south of 60th street. The toll, which would have been $8 for cars and $21 for trucks, would have only charged each car once a day on weekdays between 6 am and 6 pm. Bloomberg’s plan did not get much support and was not put into effect.

Although City Councilman Mark Weprin did not support Bloomberg’s proposal, he approved of this new plan proposed by Move NY.

“This is nothing like the old plan. This helps the outer boroughs,” he told WCBS.

A study by Quinnipiac University showed that 71 percent of participants in a survey were opposed to the tolls on the East River bridges, but this number decreased to only 49 percent when the participants were told that the toll would reduce the current tolls on other bridges to the outer boroughs.

The plan has been finalized by Move NY and already has the support of Mayor Bill de Blasio.