TRAINING FOR THE NEW YORK MARATHON 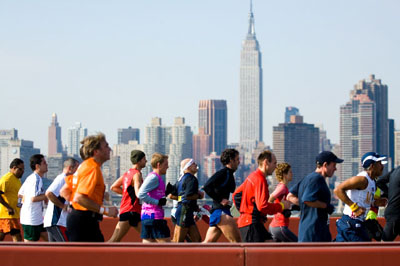 SFC student Danielle Adone will run the New York Marathon on November 6 — and here, Danielle describes the grueling months of training that go in to taking part in the most famous marathon of all.

In life, we need to feel a sense of accomplishment — a purpose; a feeling that you and only you made every second of hard work worth it.

Everyone is different; you can find this sense of accomplishment in a hobby, an invention, a relationship.

Far too many people go through life never finding one thing that makes them proud. My advice is to find a passion and pursue it.

I found mine in running and it has changed my life for the better in more ways than one.

Over this past horrible New York winter, I became bored of my usual workout and running routine.

Running a few days a week and training for the usual 5K races had become old news. I was looking for something new and challenging.

My closest friend Kaitlyn Dunphy, with whom I’ve been training with since my freshman year of high school, graduated from Ithaca College this spring and was coming home to Staten Island to attend Brooklyn Law School.

Last year we both ran our first half marathons and we have wanted to do the full marathon for years, but we feared the amount of time we would need to train.

We talked and thought about it for a couple of months and ultimately decided that this was the year.

With Kaitlyn in first year of law school and me in junior year of college, the time was right.

No real careers as yet, no husbands, no children — if we thought we didn’t have the time right now, just think how we might feel in a few years time with all of the above.

The spring semester ended and the summer began and as of the third week of July we were on our way to the most difficult training in our lives.

We looked into multiple marathon training programs but we decided to take our own route.

For the summer I ran six days a week with one day off and worked out at the gym at least two days a week.

Once school started with a hectic schedule, I decreased my running to five days a week and the gym one day a week.

The summer training was the hardest part by far. Our biggest threat was the searing heat. There was one run that I actually did not think I was going to make it home.

The heat knocks the energy out of you just lounging by the pool. By logging in over forty miles a week in the heat was a whole different story.

The worst part of the training is the one long run a week. We usually do the long runs on Saturday because it works well in both of our schedules.

We always do the long runs together — I truly don’t think I would be able to get through them alone. We began our long runs at 10 miles and increased by two miles every week till we reached twenty-one and then tapered back down to about 13.

I wish I could tell you that all of my training has been plain sailing but there has been plenty of obstacles along the way.

I hurt my knee around week five and had to cut my mileage in half that week to allow it to recover. I have had plenty of days of walking around dizzy and out of it.

At this point I realized I needed to up my calorie and sugar intake slightly because I was losing more working out than my body was taking in.

My marathon training has taken my body to limits it has never seen before. As much as I do not want to get out of bed at 8am on a Saturday or run at the gym at 9pm on a Tuesday, if it’s the only time I can fit it in, so be it.

Every minute and every mile will be worth it because I have been told by many other runners if you put in the blood, sweat and tears now marathon day will not be as bad.

I can honestly and proudly say there has been no slacking during my training so far. With well over 250 miles worth of training under my belt, I have full confidence in seeing the finish line in Central Park on November 6.

We completed the Staten Island half marathon with personal best times, giving us a chance of running the NYC Marathon in just under four hours.

With only days left until the big race, the most important thing for me right now is rest and mentally preparing myself for the run of my life.

With 45,000 participants running through five boroughs and over two million spectators, I am so excited and ready for this race — it’s what I have ran my entire life for, the ultimate running experience.

Wish me luck and never give up!