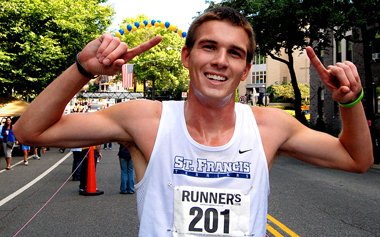 The run is in honor of Police Officer Chris Hoban, who was killed in the line of duty in Oct. 1988. This particular run funds the Hoban Scholarship at Xaverian High School in Bay Ridge.

The day prior to the Hoban Run, Nersten participated in the 18th Annual Br. John “Paddy” Doyle Meet of Champions at Van Cortlandt Park in the Bronx. Nersten came in 108th out of 141 runners with a time of 28:08.

Nersten placed first out of 510 competitors in the five-mile run. Finishing the race with a flat time of 27 minutes. This was his best time in a five-mile race.

“During the run. I just tried to stay as comfortable as possible knowing I would be tired from the race the day before,” said Nersten. “I kept the runner in first in my sights with the intent of catching him at some point.”

Running two races in one weekend isn’t easy, but Nersten was relieved after it was over.

“Going into the last mile, I was in third place. I finally got the push I needed to close the gap,” said Nersten. “I had to sprint the last mile in order to win, and I really pushed myself to catch the runner in first with a block left to the finish line.”

After coaching him for the past three years, Kyle Brown, head coach of both cross country and track and field at St. Francis, has seen Nersten become the record holding runner he is today. Nersten holds St. Francis records both as an individual (indoor 800m and outdoor 1500m) and as part of a team (indoor and outdoor 4x800m and outdoor 4x1500m).

“I watched him transform from having no confidence to being over-confident to learning the lesson that you can’t underestimate your opponent,” said Brown. “Once he found that balance, it helped him drop his times and develop as a runner.”

With only a few weeks left until the Northeast Conference, the Metropolitan, and the IC4A Championship races, Nersten’s outlook is positive.

“Personally, I wants to keep dropping my time and be able to run my fastest times during the championship season,” said Nersten.

After an astounding 4th place overall team ranking in the Metropolitan Championships in 2011, which was the best in St. Francis history, Nersten is still aiming higher.

“I would like to be able to fulfill our Men’s Cross Country team goal of placing at least top five in the Metropolitan and Conference Championships,” said Nersten. “That would surprise a lot of teams.”