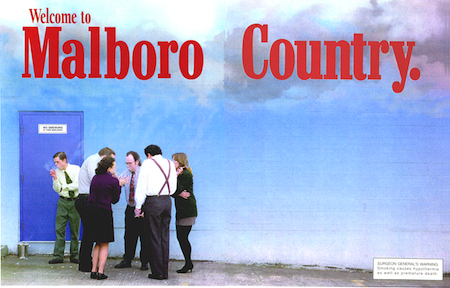 In July of this year, St. Francis College made a big announcement that SFC would now be a “tobacco-free campus.”

However, a number of smokers, students and faculty alike, are not adhering to this new policy, making a mockery of the college’s efforts to provide a healthy environment for all who attend.
In order to enforce the new “Clear Passages” policy, the college has placed signs near and around the main entrance that designate the college as a “tobacco- free campus.”

The signs are being ignored by some who spend their days at SFC.

According to the July 2011 press release on the SFC website, the “Clear Passages” policy follows the new smoking laws that were passed by Mayor Michael Bloomberg in May 2011.

Attached to the July 6th press release on the college’s website is a link that outlines the entire Clear Passages policy.

As stated in the “Clear Passages” policy, the purpose of it is to “ensure that all St. Francis College facilities and properties are tobacco-free in an effort to provide St. Francis College’s students, faculty, administrators, staff and visitors with a healthy, safe and responsible working and learning environment.”

When students are told by members of the SFC faculty that they are not allowed to smoke in the front entrance of the college, they disregard the rule and continue to go about their day.

When asked about the smoking ban, some students of SFC had a lot to say.

Sophomore Luigi Cilvietti, a smoker, said: “We are in school 24/7 with nothing to do — if I want to get out of class to relax, I would go outside and have a cigarette.”

Junior Daniel Manolo, a non-smoker said: “I think they really are addicted to smoking. When people see the students and faculty smoking, they think its alluring.”

Junior Kepler Alexander, a non-smoker said: “People just are not interested in it.”

Freshman and smoker Jesse Fuller, said: “It’s not fair for the smokers in SFC because the mayor has put different restrictions on where smokers are allowed to smoke and now that our private institution is giving us a restriction and we are paying $18,000.

“It is just not fair at all — if you look at the majority of students who are smokers, its not fair because for us who are paying to come here, its just like high school.”

For the past few years St. Francis College, in conjunction with the student run organization “Colleges Against Cancer” and the American Cancer Society’s “Relay For Life”, holds an annual “Great American Smokeout” which raises awareness of the dangers of smoking, and helps those who would like to quit smoking or who are in the process of quiting by giving them a head start through the distribution of nicotine patches.