THREE OF A KIND FOR BRADSHAW

Home /Sports/THREE OF A KIND FOR BRADSHAW 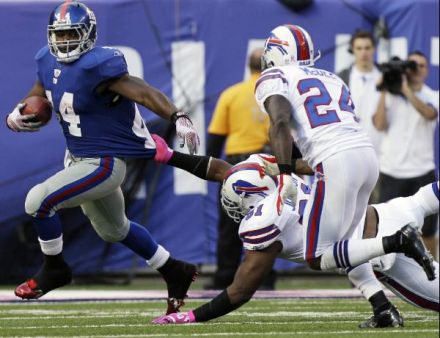 Fred Jackson slashed through the Giants defense for an 80-yard touchdown, the longest rushing play by the Bills since 1990.

On Buffalo’s next possession, Ryan Fitzpatrick found Naaman Roosevelt for a 60-yard touchdown pass. It was the first career touchdown for the second-year wide receiver.

New York’s defense settled down and made several key stops as the Giants battled to regain the lead. With the Bills in field goal range on third down with a 14-10 lead, defensive end Jason Pierre-Paul sacked Fitzpatrick for a nine yard loss to keep Buffalo out of scoring distance.

The Giants unleashed their own offensive assault on the following drive when Eli Manning found Hakeem Nicks for a 60-yard gain.

Bradshaw would score again from the one-yard line to put New York up 17-14.

New York set the tone of the second half when they drove 76 yards on 10 plays in their opening drive. Bradshaw scurried into the end zone from one-yard out to score his third touchdown and give New York a 24-17 lead.

The Giants tried to extend their lead to 10 points; however, Lawrence Tynes’ 51-yard field goal attempt was blocked by Alex Carrington.

Buffalo responded with a 12-play, 55 yard drive that ended with Fitzpatrick finding Stevie Johnson in the end zone to tie the game at 24 apiece.

The Bills, however, began to meltdown. Fitzpatrick threw his second interception of the game, this one within field goal range.

Bills cornerback Drayton Florence committed two pass interference penalties on the following drive, the second occurring on third down; to keep the Giants drive alive. Tynes successfully converted a 23-yard field goal attempt to give the Giants a late 27-24 lead.

New York and Buffalo are both entering their bye week.