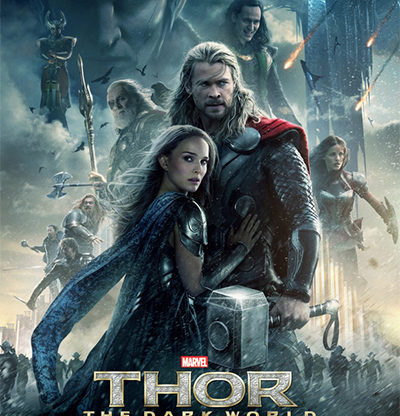 Thor: The Dark World is the both the second Marvel Phase Two film and sequel to both The Avengers and the first Thor film.

Directed by Alan Taylor (Game Of Thrones), Thor: The Dark World continues the story of Thor (Chris Hemsworth) directly after the battle of New York which transpired in last year’s The Avengers.

He gave her his word, now he’s returned after the Battle of New York.

Thor returns to Asgard with Loki (Tom Hiddleston) and all is well between the nine realms, until an ancient evil race of aliens believed to be extinct, led by Malekith (Doctor Who’s Christopher Eccleston) return, which calls for Thor and Loki to team up and defeat before the whole universe falls into darkness.

If the first Thor is a fish out of water origin story of Marvel’s interpretation of the Norse God of thunder, Thor: The Dark World is a fully fleshed out and realized film which is Game Of Thrones meets Star Wars and doesn’t feel like a superhero film at all.

The film feels more like an actual telling of the norse mythology combined with the Marvel Universe trademarks.

Rather than being a cash in sequel which has plagued Hollywood as of late, Thor: The Dark World expands on the cinematic universe established in the first Thor film.

The viewer gets to see more of Asgard and many of the other realms, and believes that these places are real, all thanks to director Alan Taylor’s experience working on Game Of Thrones.

The believability of the established universe and being reinforced upon in this film is one of its many strong suits.

Another highlight of the film comes from not the titular star, but from Thor’s brother Loki.

Scenes were added in just to accommodate more screen time for Loki, as he isn’t appearing in 2015’s Avengers: Age Of Ultron.

Every scene he’s in, Tom Hiddleston’s portrayal of the Norse God Of Mischief steals the show and garners the most laughs and applause from the audience.

One aspect of the film that separates it from other superhero films, that aren’t of the Marvel variety, is how funny the film really is.

Laughs are provided continuously throughout the movie ranging from Darcy to Dr. Selvig and many other surprises which can’t be revealed.

However, the film isn’t without its flaws.

Extreme tonal shifts happen from scene to scene in rapid succession, ranging from really depressing and cutting to uproariously funny, with no way of letting the viewer breathe and take in what just took place on screen.

It could be surmised to the editing and cutting down the movie into a few minutes scarce of a two hour run time.

The main villain of the film, Malekith, is underdeveloped and is pretty much the stereotypical bad guy; hell bent on destroying the universe for his own agenda.

The weakest character in the context of the story for most of the film until the climax, is Thor himself.

Thor just seems like a secondary character compared to many of the other characters who steal the show.

The movie should have been called Thor and Loki, seeing as the scenes featuring the two brothers showcase the strongest relationship in the film, which happens to be stronger than the relationship between Thor and Jane.

Both Alan Taylor and Eccleston have stated in various interviews online that there has been a lot of backstory cut out of the film to accommodate the under two hour length.

Fans and moviegoers alike stayed after the credits since Thor has two post credit scenes, a Marvel staple starting with the first Iron Man and on.

Even with it’s flaws, this second Phase Two film is Marvel’s strongest to date, almost just as great as The Avengers.

This is how superhero films should be handled even when they are sequels instead of a culmination film.

It’s a must see for anyone who wants to have a good time at the movies.

Thor: The Dark World is in theaters now.