Shooting yards away from SFC

Home /News/Shooting yards away from SFC 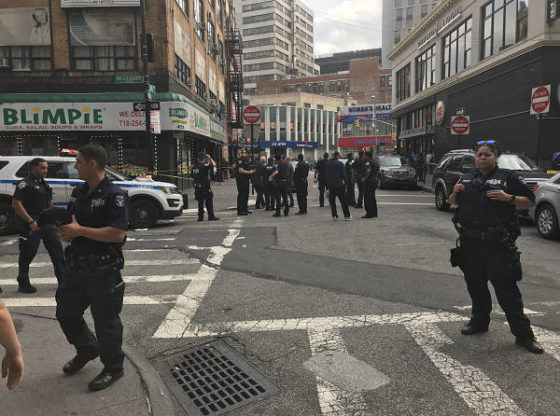 There was a shooting yards away from St. Francis College earlier today.

Brooklyn Borough President Eric Adams tweeted that the “community was deeply impacted today by gunshots fired in broad daylight, the third such incident in effectively as many months.”

Injuries were sustained “after at least one gunman opened fire at the corner of Pearl and Willoughby streets on Monday afternoon.”

According to the NYPD, “one victim, 18, was grazed in the abdomen and privately taken to Brooklyn Hospital” and another “man, 19, walked into the same hospital with a graze wound to his chest and right forearm”.

“Police are still investigating the incident and didn’t immediately know what prompted the gunshots, but [Louis] Allende alleged the altercation sounded personal and that the shooter was looking for his victim.”

Witness Louis Allende said: “I heard the comment, ‘Isn’t that the kid with the sweater that we’re looking for?’”

Cuba wrote that “the shooter fired two rounds in front of sandwich shop Blimpie around 3:45 pm, according to Allende, who said the incident occurred during a dismissal at the nearby Brooklyn Friends School on Pearl Street, sending departing youngsters running from the scene.”

Downtown Brooklyn is home to many academic institutions, and the shooting occurred just yards away from our very own campus…