THE WALKERS ARE BACK

Home /Entertainment/THE WALKERS ARE BACK 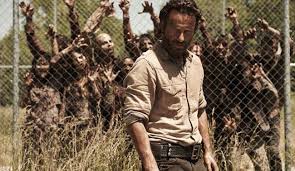 Season four brings a lot of new characters and situations, but one thing remains the same… the zombies are back in full force.

Last season, the gang went up against the Governor and his minions from the small zombie apocalypse home away from home called Woodbury. After the Governor lost his mind and killed 99% of his army, Rick had to step in and clean up the mess.

This season, the ‘Prison Gang’ has a lot of necessary things to worry about.

When Rick decided to take in all of the children, elderly and sick from Woodbury, was he really thinking?

The gang could barely keep track of Carl for the whole first season; these extra children will be anchors to weigh them down.

As seen in the Comic Con trailer, the dead are starting to surround the prison. One of their only sources of food is inside of the prison walls.

This is where the new additions from Woodbury become a burden.

While the gang is caring for the sick and the elderly, they are stuck in the prison between a rock and a hard place. It is unsafe in the prison, and equally as unsafe outside its walls.

While these new additions may increase their numbers, it could also deteriorate their strength as a group.

The Comic Con trailer shows that the zombie build up could be an effect of someone feeding them.

This lack of trust could lead to an incident similar to last season’s. An infiltration of zombies could cause a death like Lori’s.

Rick will have a lot on his plate this season. As if a pubescent boy and a hungry toddler weren’t enough, let’s add in a ton of unnecessary obstacles in his way.

Tune into AMC on Sunday, Oct. 13 at 9 p.m. to see what the zombie apocalypse has in store for Rick and the gang.

CULTURE SHOCK AT SFC
REVIEW: TOO WEIRD TO LIVE, TOO RARE TO DIE!