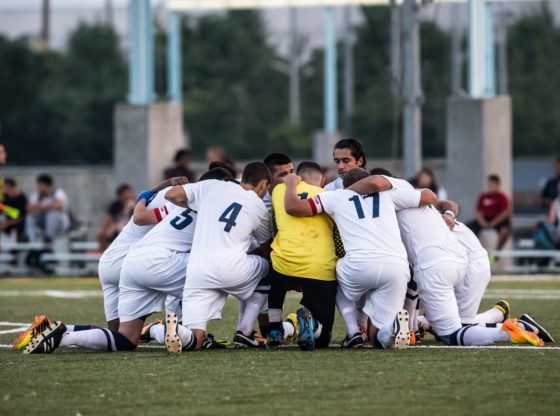 Although the Terriers came out strong, they didn’t come out strong enough for a win. In what was an intense battle, the Terriers and Colonials showed a great deal of aggressiveness right off the bat, but it was evident that the Terriers defense was a lot tighter and their offense had more momentum.

With just eleven minutes into the game, Terriers’ redshirt senior defender Riccardo Milano scored the first goal off an assist from junior midfielder Cyril Coisne. Milano was positioned in a crowded right corner and made an amazing bicycle kick, which takes perfect timing and precision. This was Milano’s second goal of the season.

Once the Terriers took the early lead in the first half, the Colonials clearly slowed down. The Terriers dominated pretty much the entire game with their phenomenal passing, volleying the ball through RMU defenders, blocking, and keeping the ball away from the Colonials.

Robert Morris played ‘keep away’ when they had possession in their zone because the Terriers forwards were extremely forceful. As for the Terriers defenders, they did not give the Colonials threatening junior forward Neco Brett many opportunities with the ball.

Brett, who has a total of 13 goals so far this season, was triple and sometimes quadruple covered during today’s game, but he wasn’t the only one. More than one Terrier defender covered whoever had the ball, making it hard for the Colonials to accomplish any goal attempt.

Terriers’ redshirt junior Jack Binks wasn’t tested much in the first half. RMU only had two shots on goal where as SFC had ten shots on goal. This type of play continued into the second half, but Robert Morris turned up their attack mode just enough to score the game tying goal. In the 57 minute of the game, junior forward Bruce Cullen blistered a free goal kick into the top right corner.

Cullen’s goal and the poor quality attempts to score on both sides of the field from the Terriers and Colonials led to an intense overtime. Both teams had many opportunities to score and win the game but they kept falling short.

Neither team was able to mount another attack, therefore ending the game in a tie.

The Colonials had 11 shots and three shots on goal in today’s contest and the Terriers had 20 shots, 11 of which were shots on goal.

SFC will come home and play their next NEC game Friday, October 24 against Central Connecticut State University at 7 pm.

VOLLEYBALL PREVIEW: TERRIERS SEEK FOR THEIR FIRST ROAD VICTORY AGAINST THE COLONIALS
WOMEN’S VOLLEYBALL TEAM PICKS UP ANOTHER LOSS