THE SMALL COLLEGE OF BIG SMOKERS 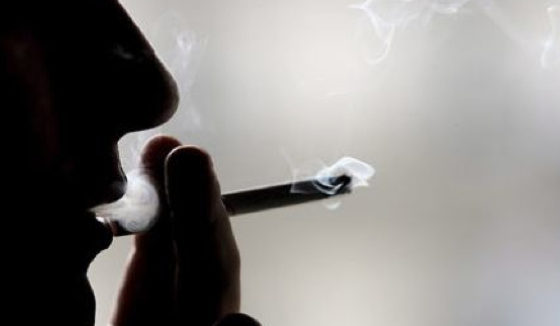 When you first walk up to St. Francis College, you are greeted by a mass of students. They are all smiling, laughing, having a good time — and many of them are smoking.

Every day, many students gather outside of SFC and smoke. There is clearly a good camaraderie — but is this the image that St. Francis wants for its school?

Does it make SFC appear cool and open minded, or does it paint a negative picture? It depends on your point of view.

SFC has had students smoking outside the building for years. And it’s likely to stay that way.

One SFC professor said: “Tobacco is a great American product … people have been smoking longer than they haven’t.”

Tobacco is a part of the culture in this country no matter how hard some in authority try to push smokers into quitting by banning the activity in public places.

SFC smokers are only a small part of the whole student body, but they are always out front of the school and they are the first thing that people see.

Students that smoke seem to think that it is not an issue at all. “It’s not a big deal. It’s just something some people do when they get older,” said student Will McCormick.

Others see it as a purely social thing. One SFC student said that it’s a good way to meet people — outside is like a “bar-like scene.”

Another student said that it helps with stress. “It’s the only place we have to smoke,” pointed out one SFC student. There are rumors of a secret place to smoke elsewhere, but those that know about it are cagey about divulging details.

Is it just that SFC smokers have no other place to go? SFC does not have a campus or even a courtyard, so smokers are forced to smoke in the most convenient place and it just happens to be right outside the front entrance for the whole world to see.

Smokers may not see themselves milling about in front of the doors as a big deal, but others do.

One SFC security guard said it is definitely bad for the school’s image. “Definitely looks bad, people got to dodge people to get in. [Visitors] always complain … smoking on the sides of St. Francis would be better.”