THE SIEGELS DISCUSS 2016 ELECTION AT SFC 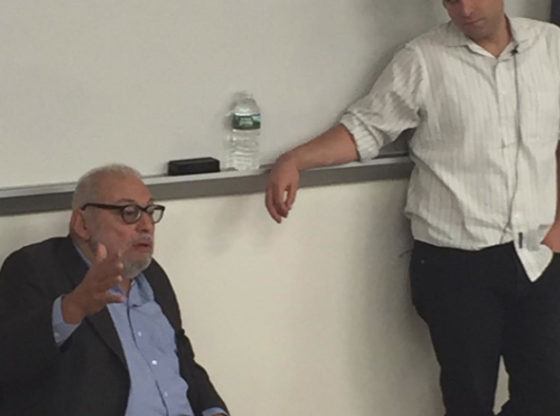 St. Francis College welcomed scholar-in-residence Fred Siegel this week along with his son – journalist and author Jacob Siegel – to discuss issues such as globalization, Hillary Clinton’s email scandal and the Alt-right in the 2016 Presidential election.

“Globalization [in the west] has produced a tremendous backlash,” Fred said at the beginning of the lecture. “…and not because people are deplorable as… the woman running for president [who] lost 33,000 files would have it.”

As the lecture progressed, globalization proved to be a pivotal point and the theme of ‘Globalism vs. Nationalism’ transformed into the question of the elites vs. the common people, which is a prominent subject in the 2016 Presidential Election.

Of course, it’s difficult to speak about the upcoming election without mentioning a candidate or two. As a result, Fred expanded his opening statement by explaining that Donald Trump’s campaign is a product of Barack Obama’s presidency.

“Without Barack Obama, there is no Donald Trump,” Siegel said.

According to Siegel, Trump rose every time the President said something foolish and he called Obama “the most polarizing president since Nixon.” He then proceeded to say that Trump is a 1950s liberal stranded in 2016.

On the topic of Hillary Clinton, Siegel affirmed that she belongs in jail and declared that the left wants do-minance and power.

His son had a different point of view. He said that neo-liberalism used to be pragmatism, but became corrupted.

Furthermore, Jacob said that the Trump Campaign took advantage of the widespread discontent in America and flirted with white nationalists and anti-Semites.

Moreover, he brought up the Alt-Right ideology, which reject mainstream conservatism in the U.S. In his words, the Alt-right houses the ‘bedrock belief’ that all men are not created equal.

“There is a national community that deserves loyalty and privilege above the global community”, which allegedly appeals to Donald Trump supporters,” Jacob said.

However, he asserted that the “anti [political correctness] umbrella is the one strand more than anything else that runs through [Trump supporters].”

The father and son duo had some polar views on certain issues, but they came to an agreement on a few as well. In response to a student’s question in regards to liberal media, both confirmed that the media has a 100 percent liberal bias and that the liberal media wants to take Trump down.

In addition, the two agreed that neither candidate would be a good president.