THE REDEEM TEAM: ALL EYES ARE ON THE BOYS FROM BROOKLYN

Home /Sports/THE REDEEM TEAM: ALL EYES ARE ON THE BOYS FROM BROOKLYN 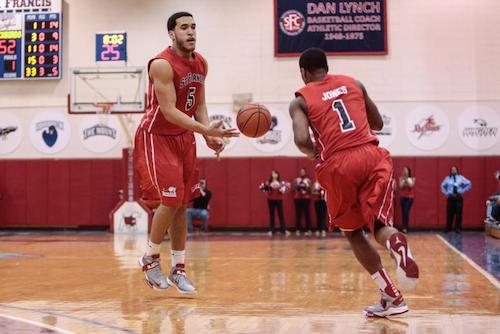 For the first time in program history the St. Francis College Brooklyn men’s basketball team was ranked number one in the NEC preseason coaches’ poll.

After a heartbreaking finish last season, the St. Francis College Terriers are ready to make their mark over the course of the 2014-2015 campaign.

This season has the makeup to be a memorable one thanks to the surplus of talent that is on the roster.

Virtually every team in the conference will make it a point of emphasis to knock off the top dogs.

The season is set to tip-off on Saturday, November 15, when the Terriers will go on the road to take on Georgetown University at 1 pm.

The team that will be taking the court for the Terriers will look a bit different from a year ago.

This is a different team from a year ago, a team that is loaded with talent and was deserving of the top spot in the NEC coaches poll. They will look to better their (18-14) mark that they left last season, which was good enough for the fifth seed in the conference.

Their leader is senior forward Jalen Cannon. Cannon has been the Terriers marquee player for two years now. He was most recently named to the Preseason All-NEC First Team.

To go along with these impressive honors, Cannon scored his 1,000th career point in a game last season against Fairleigh Dickinson University. He became the 29th member of the Terriers’ 1,000th point club.

This is the Terriers go-to guy. Cannon’s numbers will only improve as he has done each year with the school. Last season he averaged 14.9 points and 8.2 rebounds per game. These numbers were good enough to lead the team in both categories.

Cannon is due to have a huge final season with St. Francis College. Since he was a freshman he was a force in the paint. Now he has developed a jump shot, which has made his game much more versatile. He can beat teams in more ways than one, as he has refined his craft over the years.

One of the biggest surprises last season for the Terriers was the emergence of senior point guard Brent Jones. Jones became the Terriers floor general and one of the top players in the entire conference. The Terriers were in desperate need for someone to step up and fill the void they had at point guard. Jones flourished when given the opportunity.

This season it will be essential that Jones continues to develop into a well-rounded point guard. His knack for penetrating to the basket and creating space for his teammates has made him such an impact player. If Jones can pick up where he left off last season, the Terriers have one great dynamic duo.mensbaskeball2014

Two players who are returning and can play pivotal roles for the Terriers are Kevin Douglas and Amdy Fall. Both players have a high upside with a boatload of talent. Douglas has uncanny athletic ability. At 6 foot 5, 225 pounds, the guard/forward poses as a matchup nightmare for the opposition. He is too big for guards to defend and too elusive for forwards to defend. He is a hybrid player who can really find his niche this season.

As for Fall, he brought something to the Terriers that they just didn’t have in years past, a prolific shot-blocker. Fall is a lockdown defender. He averaged 16.8 minutes per game last season off the bench and tallied 1.7 blocks per game.

The thought of having a shot-blocker lurking with the ability of Fall’s struck fear in the opposition and it will continue to make them think twice before driving to the basket.

Defense was an essential part of the Terriers success last season. That must continue to be a focal point if they plan on winning the conference championship this season. This team was always good at doing the little things, now it is just a matter of putting it all together.

What will be the most crucial to the success of this team is how the new players mesh with the returning players.

There are a total of seven new players on the roster. Whether they are incoming freshman or transferring sophomores and juniors, there will have to be an adjustment period.

With every team it takes a little bit of time for things to click. Thankfully for the Terriers they have the two main pieces of the puzzle in place – Cannon, and Jones who will lead the way.

Out of the seven new players three are freshman, who will be lacing up their sneakers for the first time on the collegiate level. Guard Glenn Sanabria, forward Keon Williams and guard/forward Gunnar Olafsson round out the freshman class.

The remaining four players are all transfer students from junior college. These players have excelled on the junior college level, which has paved the way for their opportunity to contribute to this Division I program.

Junior’s forward Chris Hooper, forward John Doss, forward Antonio Jenifer and guard Tyreek Jewell all plan to make a lasting impact on their new team. Each player has made a name for themselves on the NJCAA level and the Terriers hope they can translate their games onto the Division I level.

This team has the makings of winning the conference and making a run at a spot in the NCAA tournament for the first time in school history.