The New Terriers of Brooklyn 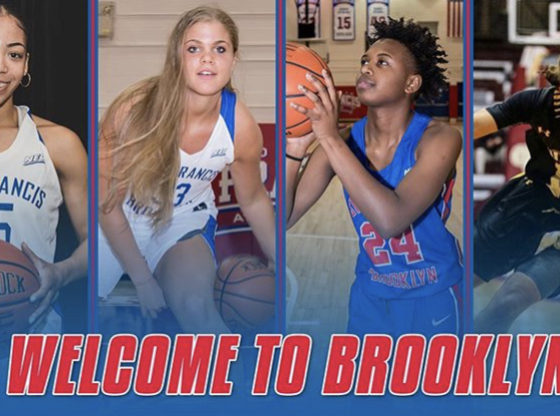 With the loss of seven graduating seniors this past season, the St. Francis Terriers women’s basketball team plans on rebuilding their squad with the signing of four new players to the team.

“Our staff was tasked with an incredible challenge to replace seven outgoing seniors. I think that we did a good job bringing in the pieces that we need to build this program and to go further,” coach Cimino stated.

“Fortunately, we have three key pieces returning in Abby Anderson, Ally Lassen, and Jade Johnson. It’s not easy to bring in so many players in one class, but our staff worked really hard, we left no stone unturned, we were in gyms all over the world, and hopefully, we’ll reap the benefits of our hard work,”

Jenna Jordan derives from Valley Cottage, NY where she spent her past four years at Saddle River Day High School. Standing at 6-foot tall, coach Cimino has labeled her as a “solid, strong, physical post-player”, who has the ability to score in multiple ways.

Coach Cimino also stated that, “I anticipate that she’s going to be a top rookie in this league, and we’re very fortunate that things worked out the way they did.”

With the return of forwards Ally Lassen and Abby Anderson, Jordan can easily come off the bench and assist, Sophomore Casey Carangelo.

Jordan averaged both 11.1 points and 14.2 rebounds per game during her junior year of high school. She also earned the All-County honors twice and was acknowledged to the All-State First Team.

Alyssa Fisher is a native of Baton Rouge, LA. While attending University Laboratory High School, the 5-7 guard averaged a total of 20.9 points, 4.9 assists, and 4.3 steals per game.

With the loss of now SFC Alumni Amy O’Neill, who recently signed a professional contract with the Southern Sabres of the NBL1 league, Fisher can fill in the vacant role of the starting point guard with her athleticism, quickness, passing ability, and defensive ability.

Coach Cimino pointed out that, “Her sister plays Division I college basketball, so it’s in her blood. She’s athletic, very quick, and she’s a good shooter.”

Coach goes on to say that, “She has a really good first step, and she’s going to be able to help us early on in the backcourt with pressure defense and scoring on offense.”

Fisher had helped her high school team win the State Championship in 2015 and to the State Semi Finals the following year. Some of her accomplishments include; being named to the USA Today/American Family Insurance All-USA Louisiana Girls Second Team, First Team All-State and First Team All-Metro honors.

Fisher has also reached the 1,5000-point mark, during her four years in high school.

Jade McMillan, whom also goes by McBuckets by coach Cimino, is a native of Concord, NC. She was a student at CFA Academy and was named Conference MVP during her final three seasons at the school. McMillan led the team in rebounds, steals, blocks, and has reached the 1,500-point mark.

She was named All-State in North Carolina and was also nominated as a top player in Charlotte, NC.

“She’s a tremendous athlete who is very good at getting to the basket. She has the ability to play the point and the wing, and is a very good defensive player,” coach Cimino said. “One thing that really impressed me during the recruiting process was her work ethic as she worked two jobs to pay for her high school tuition.”

Finally, Melody Van Ness is a transfer student from UMBC who only made four appearances on the court during her freshman season. During those four games, she averaged 7.3 points and 2.3 assists per game.

“She’s a floor general, composed at the point, and she’s somebody who can run the offense and score,” coach Cimino had stated.

All four of these players (Jordan, Fisher, McMillan, and Van Ness) will make their St. Francis College debut during the 2019-20 season which starts this upcoming November. Hopefully, they will be the start of a new era of success for the team.