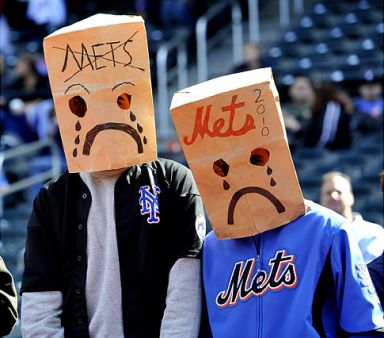 Opening day is about two weeks away and only that game and the 161 regular season games that follow will answer the Mets v. Mutts question.

During their 49-year history the Mets as a team have had many up and down seasons. The last three years have been particularly mutt-like; although their budget is among the highest in the major leagues. At the end of the 2010 season it was relatively obvious to one and all that the branches of the Mets’ organizational tree were dead, dying or wilting. Revitalization was necessary.

On June 17, 2008 Willie Randolph was unceremoniously dumped after two losing seasons and he was replaced with Jerry Manuel. He continued the downward process until October 2010.

At the same time the Wilpon’s, owners of the Mets’ franchise decided that enough was enough and began a major overhauling of the team’s management.

First to go at the end of the 2010 season was Manuel and he was followed out the door almost immediately on October 4, 2010 by the General Manager, Omar Minaya who had hired Manuel just a few short years ago.

Around this time there was a rumor that the Wilpons were involved in the Bernie Madoff’s Ponzi scheme which may partially explain their ultimate choice of a new General Manager.

A list was drawn up with the names of 31 possible replacements as General Manager and the first name on that list was Sandy Alderson.

The elimination of 30 names went rather quickly and on October 27, 2010 the waiting was over and Sandy Alderson became the Mets’ new General Manager.“Who is Sandy Alderson?” was the question raised by some baseball fans and Mets’ fans in particular and “Why was he chosen?” The answer may relate back to the Ponzi scheme rumor and the potential need for funds.

Alderson’s baseball career is extensive and successful particularly during his time with the Oakland A’s when they won four division titles, three pennants and the 1989 World Series.

At that time the A’s budget was among the lowest in the major leagues but they approached the acquisition of players based on analytic principles rather than subjective (“he looks good”) principles.

A baseball fan named Bill James had started collecting and analyzing MLB statistics which he entitled “Baseball Abstracts” and these abstracts became the basis of the A’s management’s approach to hiring.

With a new G.M. and staff now in place the Mets hierarchy concentrated on the manager’s spot and a list of four finalists popped up including fan favorite Wally Backman, who was eventually rewarded by being named Manager of the Mets’ AA Binghamton franchise.

The other two candidates, Bob Melvin and Chip Hale, were eliminated and the ultimate choice was Terry Collins and once again the question from the Mets’ fans was “Who?”

According to Bill Madden of the New York Daily News “Alderson went for the twice-fired Collins because Paul DePodesta was pushing for him … and this choice became a referendum on the new Mets upper management regime.”

This “referendum” ultimately resulted in an almost full-fledged flushing out in Flushing of the entire coaching staff, including long-time Mets player and coach Howard Johnson … HoJo to his many fans.

Replacing HoJo as hitting coach was Dave Hudgens who only had one hit in seven at-bats during his major league career but according to a Mets Online report “He was hired more for his baseball knowledge and discipline rather than for his actual [hitting] experience.”

Since everyone has heard that Collins is “fiery, intense and passionate,” choosing a bench coach was next. The more even-keeled and calm Ken Oberkfell seemed to balance out the fiery manager.

The second-to-the-last new coach but certainly not the least in the view of Mets’ fans is Mookie Wilson as first base Coach which position he held with the Mets from 1997 to 2002 after playing ten seasons with them including the 1986 season.

The final new coach is Jon Debus who will serve as bullpen coach who worked with Collins in Japan and who is credited with helping to develop All-Star catcher, Russell Martin.The Mets retained both Dan Warthen as pitching coach and Chip Hale as third base coach.

The answer to that question might be to change either the top branch -the Wilpon’s, and/or the bottom branch- the team.

In January 2011 the choice of Alderson as a fiscally sound manager seemed to be clearer when the Wilpon’s asked for financial assistance by announcing that a 20-25% “non-controlling interest in the franchise” was for sale.

Then in February MVFoxOnline reported “the Mets’ admission that they took a loan from Major League Baseball in the amount of $10 billion.” Could a sale of the franchise be far behind? The Wilpon’s said “No.”Is selling percentages of the franchise and borrowing money the Wilpon’s attempt to solve its financial woes and to revive its brand of the organization?

Spring training is almost over and opening day is April 1 and just around the corner. A shake-up of the team’s structure is still under way.

As is often the case in the Major Leagues, pitching is an on-going problem, although the youngsters Joh Niese and Chris Young show promise and seem healthy which is good!

R.A. Dickey at the ripe old age of 37 is still confusing batters with his knuckleball although in a recent less-than-good outing he described his knuckle ball as “grotesque” but on a good day it is brilliant.”

Johan Santana just turned 32 and according to Andy Martino of the Daily News “neither Santana nor the Mets knows when he will return, or if he will ever again resemble his former self” and his continued rehab is in doubt.

That leaves the “Triple P’s”, Bobby Parnell, Mike Pelfrey and Oliver Perez to possibly be the everyday pitchers along with Dickey and Niese, the erratic K-Rod, Pat Misch and Dillon Gee.

Several weeks ago Carlos Beltran and his agent finally agree that Beltran should move from center field to right field. Since then he has developed tendinitis in his “good” leg and has been moved to the DL.

According to a March 14 report on MetsOnline, Scott Hairston continues to show some pop –“hitting .407 [in spring training] through 27 at-bats — and if Beltran ends up missing significant time” Hairston could be of value in the outfield.

The outfield now seems reasonably certain with the wily Angel Pagan in center field being franked possibly by Hairston and Jason Bay who hopefully will have a resurgent year.

If David Wright and Jose Reyes also have a resurgent and injury free year, the “hot corner” looks good while Ike Davis at first seems to be getting better every year.

Josh Thole has proven that if he can coral Dickey’s sometimes grotesque knuckle ball and the more normal fast and curve balls. He is the Mets catcher of the future.

That leaves the second base position to be decided which at this time appears to be a bizarre version of the old Abbott and Costello routine of “what’s on second” with Brad Emaus, Justin Turner and Luis Hernandez leading the pack with Daniel Murphy as a runner-up.

From this group will come either the Mets or the mutts of the 2011 season in Flushing.

As the old radio announcer would say “Stay tuned for further developments”.