THE MELODRAMA IS OVER

Home /Sports/THE MELODRAMA IS OVER 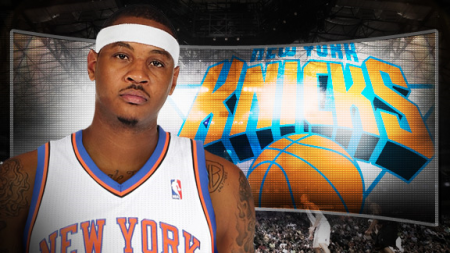 Lebron James spoke those now infamous words “I’m taking my talents to South Beach”, Knicks fans were crushed they didn’t sign the top free agent available. With the drop of a hat, the next thought of Knick fans was “Get Carmelo!”

Back in August, when Carmelo Anthony was hesitant of not signing a 3 year-$65 million dollar extension with the Denver Nuggets, the trade talks started. Now with the acquisition of Anthony and pairing him up with Amare Stoudemire, the Knicks are ready to take the second half of the season by storm.

The Carmelo Anthony trade involved three teams and many players. Here’s a breakdown of the trade and what players now have a new home.

Knicks Traded- Wilson Chandler, Danilo Gallinari, Raymond Felton and Timofey Mosgov to the Denver Nuggets. The 2014 1st round draft pick of the Knicks also went to Denver along with two second round picks in the 2013 and 2014 NBA draft. They also traded Eddy Curry and Anthony Randolph along with $3 million dollars to the Minnesota Timberwolves.

This is a good trade for the Knicks. Wilson Chandler wasn’t expected to re-sign with the team in the offseason anyway. Danilo Gallinari, though loved by the fans was too inconsistent and Carmelo Anthony is a step up. Raymond Felton was a nice surprise for the Knicks this season, but Chauncey Billups is proven and has more experience. Mosgov was a rookie center who the Knicks had high hopes for, but he the final piece the Nuggets wanted for Carmelo.

Fans are happy to see Eddy Curry and his high contract off the payroll and underperforming Anthony Randolph leave the team.

To solidify the defense and with an open roster spot the Knicks are looking to bring back Earl Barron who averaged 11 points and 11 rebounds down the stretch last year for the Knicks.

Carmelo is coming back home playing for the Knicks. Knicks fans need to thank LaLa, Carmelo’s better half as she influenced him to accept the trade to New York.

The combination of Amare, Carmelo, Billups and rookie Landry Fields should make for a very interesting second half of the NBA season for the Knicks. They resume their season on Wednesday night as they take on the Milwaukee Bucks at Madison Square Garden.