THE MAN BEHIND THE NUMBER

Home /Sports/THE MAN BEHIND THE NUMBER 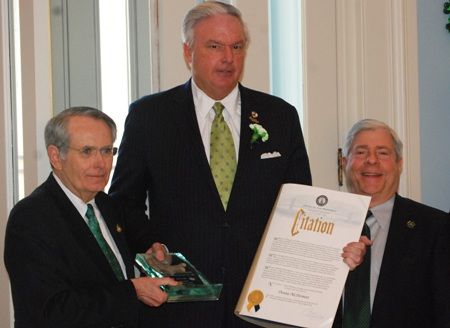 New York City is known as the “Mecca of Basketball”. With such a large pool of talent, many deserving players get overlooked. Dennis McDermott, a real New York City old-timer and St. Francis College legend is one of those overlooked.

He was the eighth man on a talented team. The team finished third in the CHSAA behind Power Memorial and Archbishop Molloy. McDermott played hard, but sparingly.

That changed when during the summer between his junior and senior year. He hit a growth spurt. By becoming taller by five inches he gained the attention of his coaches and scouts. One person who noticed McDermott was then SFC Athletic Director, Dan Lynch who gave him a scholarship to play for St. Francis College.

Dennis McDermott started his college career playing for the Freshmen Team, as freshmen were not allowed to play on the Varsity squad at the time. He was guided by freshmen head coach Frank Aquilone and eventually moved up to the A team beginning in his sophomore year.

Division I Men’s Basketball is one of the most competitive sports leagues in the world. The main competition came from division rival such as St. John’s, Providence, and Navy. St. John’s proved to the toughest rivals with their star player Mel Davis, who eventually played in the NBA for the New York Knicks and New York Nets.

One particular moment during his career McDermott fondly remembered was his last second buzzer beating shot to defeat Xavier. “I just put up the shot for the buzzer beater and won the game for my team which was great.”

In such a competitive league, McDermott kept in shape with rigorous workouts during the summer. He often played at the famous Rucker Park in Harlem, playing against some familiar names such as Nate “Tiny” Archibald, Tom Williamson, and Earl “The Pearl” Monroe. He said “I worked extremely hard while playing here. I had a strict routine in the summer time, conditioning for two hours a day and playing the rest.”

The hard work put in offseason after offseason paid off for McDermott, who finished in the top twenty of the nation’s best scorers, averaging 23.8 points per game in his senior year.

He was also selected to the ECAC Weekly All-East Teams several times, the All Mecca Conference Player of the Year and the All Metropolitan Team in his junior and senior years.

After graduating in 1974, McDermott got his big break with a tryout for the New York Knicks “I received a telegram that I was invited to the camp to try out for the team.”

He tried out in a four day session held at Pace University. He was drafted by the Knicks in the eighth round but never suited up for a game. “I was going to go Spain to play but I decided not to after I got married to my wife Cathy, who I met going here. I got married in 1975 and started to work at Packer Collegiate.”

Basketball is a physical game as well as a mental game. When asked if players from New York City play with a different swagger and confidence, he replied, “At the end of the day, people will respect you if you can play”.

Some advice from McDermott to student athletes today:

“You have to take time to develop your skills. I think the only way to do that is hard work and extra work on top of that. But you need an education as a fallback because you can’t play forever. If you don’t put in work in the classroom, you won’t play.”