The Life of a Division I Tennis Player

Home /Sports/The Life of a Division I Tennis Player 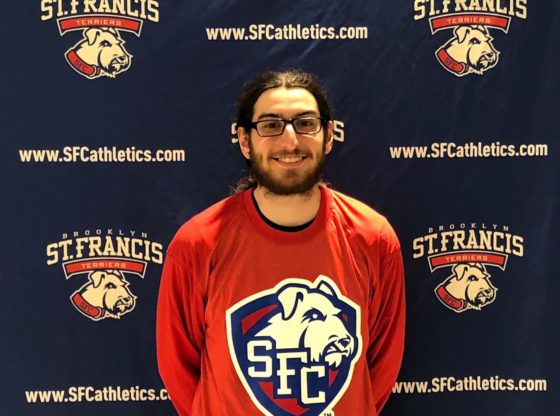 You may have seen him carrying a guitar in the halls of SFC, or you may have heard him being referred to as “Jesus” due to the length of his hair.

Regardless, when Michael Sparacino is asked about his experience at SFC, he says “I love this school”.

Sparacino was a walk-on for the men’s tennis team during his sophomore year.
After he told me about his hectic schedule, I asked him how he balanced academics and athletics.

“I’ll be honest, sometimes it’s a real struggle to balance the two because with the practice times it can be hard to get an adequate amount of sleep to function properly all the time.

“Throw in gym workouts and match times and locations on top of 18 credits and it’s sometimes hard to keep up with.

[It’s not easy] to [always] give it your all because you won’t be 100% physically. But it’s just one of those things you have to push through until you reach the light at the end of the tunnel, which is especially true for me now that I’m graduating.”

Sparacino entered college as an Accounting major, then changed to “undecided”, but finally declared Comm Arts as his major.

He credits the college faculty and staff for their support.

Originally, Michael wanted to be an accountant. After taking several classes, however, he came to the conclusion that the accounting life was not for him.

Sparacino was undecided for the most of his second year at SFC, but declared Communication Arts as his major at the end of his sophomore year.

He chose his major in what some would say is an unorthodox manner – he went through the course catalogue and came across the requirements for communication majors.

He liked what he saw and, since he wanted a job in sports, Michael figured that majoring in Comm Arts would open the doors to many opportunities in sports-related careers.

He wasn’t wrong. In fact, Michael currently works for Brooklyn Sports and Entertainment as a member of the Game Night Crew – a job that Christopher Hughes, Associate Director of Career Development at the St. Francis College Career Center, encouraged him to apply to.

Sparacino recommends students to “talk to people that are close to you because sometimes they know you better than you know yourself and can help you in tough situations…let them give their advice, ultimately the choice is yours to make but don’t disregard their input”.

He has had a good experience at SFC and feels that he has acquired the skills necessary to flourish in life, personally and professionally.

His plans post-commencement include starting a blog and podcast about hockey in addition to searching for jobs in the sports industry.

However, being the athlete that he is, once he graduates SFC Sparacino does not intend to quit playing tennis or being active in general. In fact, he plans to run in the five borough NYC Marathon.

Jackie Robinson: The Life of a Legend
Under the Influence – How the Beatles Influenced the Rolling Stones