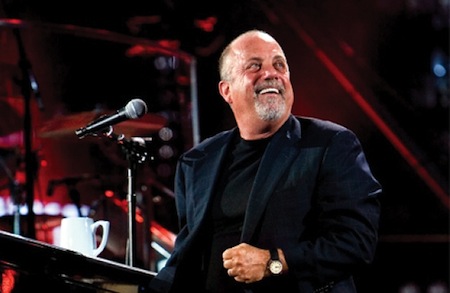 On March 2, 2011 St. Francis College was host to an event known as The Last Play At Shea. The event was a tribute to the historic stadium with a documentary film that featured Billy Joel and some of the stadium’s greatest moments.

The event was hosted by the Communication Arts Department, organized by Professor Gewirtz. After a brief introduction about the film the event was underway.
Whether you are a New York Mets baseball fan or a fan of Billy Joel (or both) it was truly a feature to remember. The documentary focused on Billy Joel coming up as an artist right around the time Shea had been built.

The film linked Billy Joel’s growth as an artist and made connections with the growth of Shea and the Mets. Concert clips were presented; fans were able to watch Billy Joel’s final concert as well as the first concert played at the Stadium by the Beatles.

The film also tied in Billy Joel’s music with some of the Mets greatest moments in history.

Some of the moments included the 1969 world series when the black cat would run past the Cubs dugout, and the 1986 world series where Mookie Wilson’s ground ball would roll through the Red Sox first baseman’s legs. There was also a segment about how Shea Stadium would be the first place that a ball game would be played after 9/11.

In the documentary,Billy Joel talked about his life growing up in New York City. It was songs like New York State of Mind and Miami 2017 (Seeing the lights go out on Broadway) that captured the hearts of fans at the final show.

After the film there was a Q&A portion of the event with Todd Kamelhar (Producer of the film), Jeff Schock (administrator of Billy Joel Archives), and Dave Rosenthal (Billy Joel’s keyboardist). The most common question was: What was it like to work on the concert and film for such a big production?

The night concluded with the raffling-off of the Last Play at Shea CD and DVD. What was the most exciting part about the CD and DVD? They would not be available to the public for another week! Lauren Deceglie and Christina Coladonato were the lucky winners of the raffle.

The event was a general success, and St. Francis College was proud to host such an event.

For those who missed the event, and are fans of Billy Joel or the New York Mets, you can always check out the Documentary DVD The Last Play At Shea.

“A PRESENT REFLECTION ON A PAST LIFE”
DESIGN A BABY