THE JACK OF ALL SAVES

Home /Sports/THE JACK OF ALL SAVES 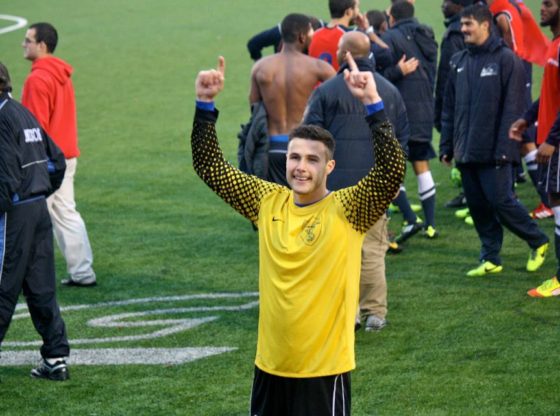 Terriers’ goalkeeper Jack Binks has had an amazing career thus far playing for the St. Francis men’s soccer team and is experiencing the New York City life exactly the way he hoped he would.

Born and raised in Darlington, England, the redshirt junior knew he wanted to be an international college student.

He attended Siena College in Albany for his freshman year but it just wasn’t what he expected and decided to transfer to SFC.

“I had an opportunity to really be in the city,” said Binks. “I thought it was time for me to experience the city and not live in dorms, live in my own apartment.”

He and most of his teammates live together in a building in Downtown Brooklyn where they enjoy each other’s company.

“There is about 12 of us across a few apartments in the same building and the chemistry is really good. We’ll have movie night, have barbecues, and try to do everything together,” said Binks.

He considers his transfer to be one of the greatest choices he has ever made because he is attending a college that has helped him grow into a well-rounded student.

“St. Francis is a college, it’s not a university, so a lot of the professors aren’t stuck doing research and they’re actually there for undergrad students, which is quite refreshing. There’s a lot of freedom in classes and a lot of freedom outside of school,” Binks said.

With a bachelor’s degree in Psychology under his belt, Binks is also majoring in English and has started the BMMA program in psychology.

Besides keeping up with his schoolwork, the striving student athlete works 20 hours a week in the colleges Financial Affairs office and coaches a youth soccer team in Queens called Eleftheria Pancyprian a few days a week.

The veteran soccer player also exerts a great deal of strength on the field with his team. Although he was unable to play his sophomore year, Binks played his first season for the St. Francis Terriers as a redshirt sophomore and it is a season he will never forget. He led the Terriers to their first NEC Championship title in 15 seasons.

“Last year was the year we did it. It was what everyone was dreaming about. It was just amazing. I can’t explain the feeling,” he said.

Binks ranked first in the Northeast Conference in shutouts with seven last season and finished third in the conference with 71 saves, averaging four per match. So far this season, he has six shutouts and a total of 37 saves.

The talent Binks exhibits on the field would make it hard for anyone to believe soccer wasn’t his starting point. Back in England he attended a private school that didn’t have soccer, so he played rugby and cricket, focusing mainly on rugby. However, Binks explained that while he was playing rugby he kept breaking his fingers, which hindered his weekend games when playing goalie with his friends. This forced him to give up one sport.

“I ended up playing soccer as my main sport and then got a good opportunity to play down in London when I was 16 and I haven’t looked back since,” said Binks.

When he was young, being goalkeeper wasn’t his favorite position. He stated that he always wanted to be an outfield player but was told he wasn’t good enough.

With the way he has been performing as goalie, no one would consider him being ‘stuck’. There is no denying he has a niche for the position he plays. He is great at commanding from the back and keeping his teammates in check on the field.

“If I can organize my center backs to mark the right guys, tell them to push up when they need to, then it just makes my job a lot easier,” Binks explained.

He emphasized that as a goalie you sometimes don’t get a chance to touch the ball the entire game and then last minute you’re called to make a save, but Binks is always eager to be called into action.

“All goalkeepers want to be a hero,” he stated. “It’s almost like scoring a goal for goalkeeper if you could make a one-on-one save in the last minute. It’s the closest thing we have to scoring a goal. That’s our little glory.”

With the season more than halfway over, Binks is hoping he could repay Coach Giovatto with another heroic ending.

Aside from soccer and further down the road, Binks doesn’t know what he wants to do when he graduates. One thing for sure is he is definitely thinking about staying in New York City.

“I love it here,” he said. “I’m very much independently living and I’d like to keep that going. It would be very difficult to move back home now.”
< Prev